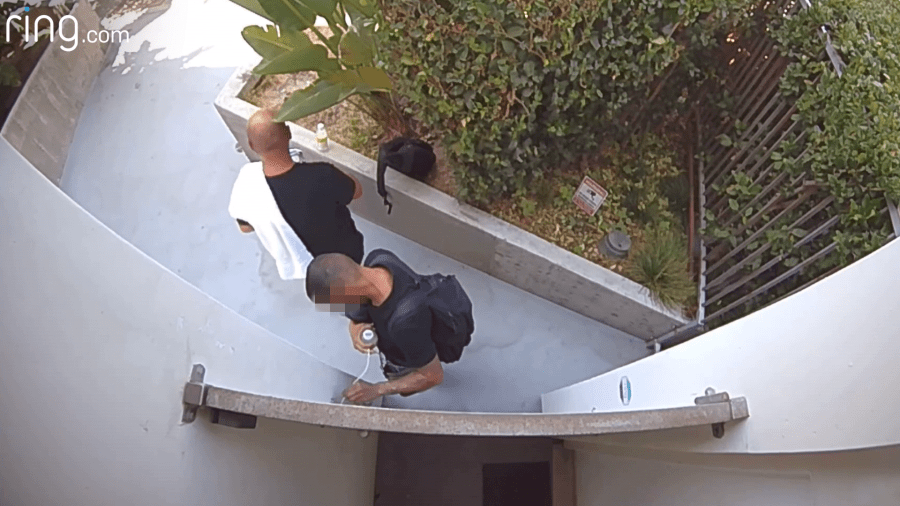 A homeowner in West Hollywood avoided a break-in last month after a pair of would-be burglars were foiled by the home’s security camera and alarm.

Video from the almost-break-in was shared with KTLA by Amazon, which owns Ring, the home security system company.

The video shows a pair of men wearing dark clothing and backpacks as they approached a locked security door at the end of an entryway. One of the men turns to face the sidewalk, apparently acting as lookout, while the other man fetches a long string from his bag.

The man then begins sliding the string between a crack of the security door and slowly lowering more slack, in what appears to be an attempt to open the door from the other side.

The homeowner was alerted to motion at their door and checked in on the camera, only to find the incident unfolding live.

But before the two men are able to see if their plan would work, the homeowner’s alarm sounded and the two men quickly gathered their belongings and calmly walked away from the scene.

The attempted break-in happened some time in late July in West Hollywood in the area of La Brea Avenue and Sunset Boulevard.

The owner, who did not wish to be identified, has filed a police report, but also said this is not the first time someone tried to break into their home. In fact, they said it happens quite frequently in the area.

The greater Hollywood area has been the subject of increasing violent robberies, burglaries and break-ins in recent months. In March, Los Angeles County Sheriff’s Department officials said crime in West Hollywood was up more than 137% from the previous year.

Earlier this month, the Los Angeles Police Department and the L.A. City Council announced plans for increased police patrols in Hollywood following several violent crimes. The announcement came with some support, and a lot of frustration, by Angelenos.

As for the homeowner who this time was able to avoid a break-in, taking security into their own hands worked out in their favor.

Anyone with information about this or other break-ins in the greater Los Angeles area can provide tips to investigators online at LACrimestoppers.org.

Driver rescued after car plunges into water in Orange County