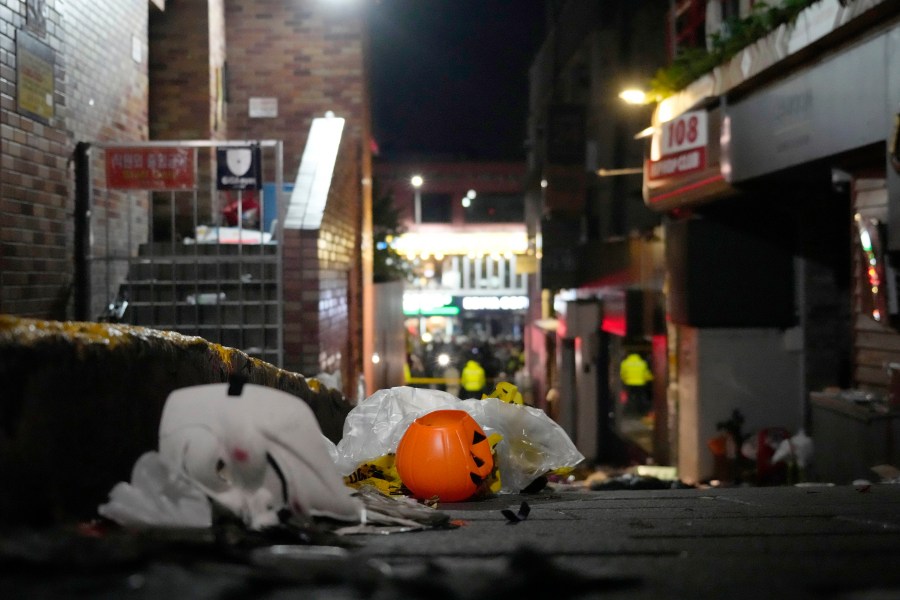 SEOUL, South Korea (AP) — In one moment, thousands of Halloween revelers crammed into the narrow, vibrant streets of Seoul’s most cosmopolitan neighborhood, eager to show off their capes, wizard hats and bat wings.

In the next, a surge of panic spread as an unmanageable mass of people jammed into a narrow alley in Itaewon. Toppled revelers were trapped for as long as 40 minutes, stacked on one another “like dominoes” in a chaotic crush so intense that clothes were ripped off.

A stunned Seoul was just beginning on Monday to put together the huge scope of the crowd surge on Saturday night that killed at least 154, mostly people in their 20s and 30s, including foreign nationals. Officials said they expected more deaths because there were nearly 150 others injured, 33 of them in serious conditions.

Witnesses described a nightmarish scene as people performed CPR on the dying and carried limp bodies to ambulances, while dance music pulsed from garish clubs lit in bright neon. Others tried desperately to pull out those trapped at the bottom of the crush of people, but often failed because there were too many of the fallen on top of them.

“We were just stuck together so tightly we couldn’t even shift to call out and report the situation,” said one survivor, surnamed Lee. “We were strangers, but we held each others’ hands and repeatedly shouted out, ‘Let’s survive!’”

Kim Mi Sung, who works for a non-profit organization in Itaewon, told The Associated Press that nine out of the 10 people she gave CPR to eventually died. Many were bleeding from their noses and mouths. Most were women who dressed as witches or were in other Halloween costumes; two were foreigners.

“It was like a hell,” Kim said. “I still can’t believe what happened.”

In this ultra-wired, high-tech country, anguish, terror and grief — as well as many of the details of what happened — are playing out most vividly on social media. Users posted messages desperately seeking friends and loved ones, as witnesses and survivors described what they went through.

“I thought I was dying,” one woman said in posts on Twitter. “My entire body was stuck among everyone else, while people laughed from a terrace and videotaped us. I thought I would really die if I cried out. I stretched my hands out to (others) who were above me and I managed to get out.”

An unidentified woman in her 20s wept as she described the scene to the Yonhap news agency: “It looked like the graves of people piled upon one another. Some of them were slowly losing consciousness and others seemed to have already died.”

A man, surnamed Kong, said he managed to escape to a nearby bar with his friends after the crush happened. He saw through the bar windows that people were falling on top of each other “like dominoes,” Yonhap reported.

When a 27-year-old office worker who gave only his surname, Choi, left the bar he’d been in during the crush, he saw dozens of police and paramedics. “It kind of looked like a war zone,” he said.

The bodies of 10 to 15 people were lined up in front of the King Kebab restaurant on the asphalt and were being covered up with blue tarps as he walked by.

Friends and family members gathered at a local government office to try to find news about the missing.

One Twitter user posted a series of messages asking for information about a 17-year-old friend who had gone to Itaewon to celebrate wearing a hairband that looked like cat ears.

“I lost contact with her. She’s been a friend of mine for 12 years, and we were like family. Please help me,” the message said.

Even after the crush, witnesses said they saw some revelers not immediately making way for emergency vehicles, rescuers and police officers. One viral video clip on Twitter showing a crowd of young people dancing and singing near the carnage drew several insults from South Koreans.

Ken Fallas, a Costa Rican architect who has worked in Seoul for the past eight years, watched stunned as a dozen or more unconscious partygoers were carried out from a narrow backstreet packed with youngsters dressed like movie characters.

Fallas said police and emergency workers pleaded with people to step up if they knew how to give CPR because they were overwhelmed by the large number of injured.

“I saw a lot of (young) people laughing, but I don’t think they were (really) laughing because, you know, what’s funny?” Fallas said. “They were laughing because they were too scared. Because to be in front of a thing like that is not easy. Not everyone knows how to process that.”

AP journalists Juwon Park in Seoul, South Korea, and Jee-won Jeong and Kiko Rosario in Bangkok contributed to this story.

When is the next drawing?

Man who inspired ‘The Terminal’ dies at Paris airport