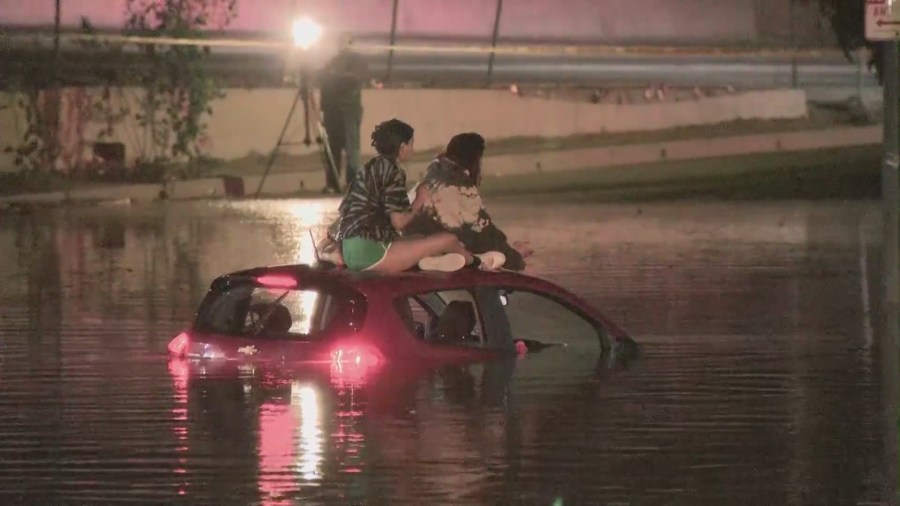 Two women had to be rescued from atop their vehicle after a water main broke and flooded the streets of Hollywood Hills with several feet of water Wednesday morning.

The incident was reported about 2:30 a.m. near the intersection of Cahuenga Boulevard and Odin Street.

“It’s lifted up the sidewalk here on Cajuenga,” Los Angeles Fire Department Assistant Chief Carlos Calvillo said about the water that continued to flow out of the broken main at 5 a.m.

The break flooded the street with 5 to 10 feet of water, which left one vehicle stuck.

“When firefighters were on scene we had two females up on top of the roof the car,” Calvillo said.

Rescue crew members used a ladder as a bridge for the women to climb off the car and get to a safe place.

The women were OK following the incident and were not transported to a hospital, Calvillo said.

The Los Angeles Department of Water and Power was at the scene looking for a way to shut the water main completely off.

The amount of water already on the street had Calvillo concerned about a possible sinkhole developing.

“If you get a large body of water like this … where is it going to release to? And if it does release, it could be very quick and sudden and it would basically suck everything down with it. So that’s an extreme safety hazard for us,” he said.

Officials are still trying to determine what caused the break.

Ventura man gets 26 years for molesting his child