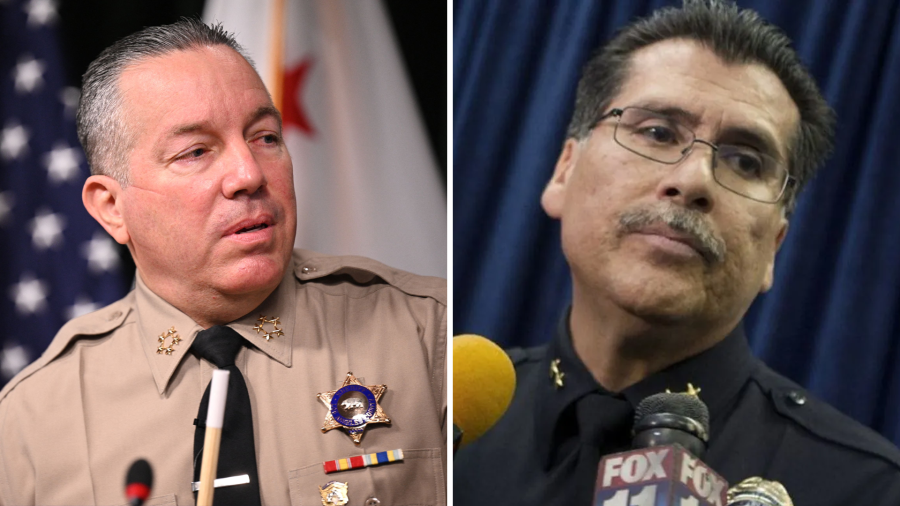 L.A. County Sheriff Alex Villanueva and former Long Beach Police Chief Robert Luna had no trouble insulting each other in their first debate.

There were several references to the ongoing clashes between the sheriff and the Board of Supervisors, including the recent decision by state Attorney General Rob Bonta to take over the Sheriff’s Department investigation into Supervisor Sheila Kuehl and a deal with Metro.

“I strongly agree that the attorney general stripped the sheriff of this investigation because the sheriff had no business investigating this from the very beginning. You can’t investigate your political opponents,” Luna said.

The candidates also disagreed with the way each handled the violence following the death of George Floyd.

“When Long Beach was burning down in the middle of the riots, where was my opponent?,” Villanueva asked. “He acquiesced to what the mayor and the political establishment of Long Beach said, which is ‘Don’t do anything, don’t offend the looters.’”

“He’s the sheriff of L.A. County,” Luna said. “If he would have been doing his job that day and summoned more mutual aid for the entire area, Santa Monica, Beverly Hills and Long Beach wouldn’t have suffered the way we did.”

Villanueva also alleged Luna was part of a racist police department, using several visual aids in a bit of show and tell.

“And when people came to Mr. Luna as a supervisor to complain about it, they’re the one who faced the retaliation,” the sheriff said.

“A very good detective brought it to my attention, and immediately I turned it over to my deputy chief and we turned it into an administrative investigation,” he said.

After a contentious debate, however, the men did agree on one thing: their favorite TV show, “The Big Bang Theory,” prompting a high-five.