VIDEO: Waterfalls form in Death Valley due to hurricane 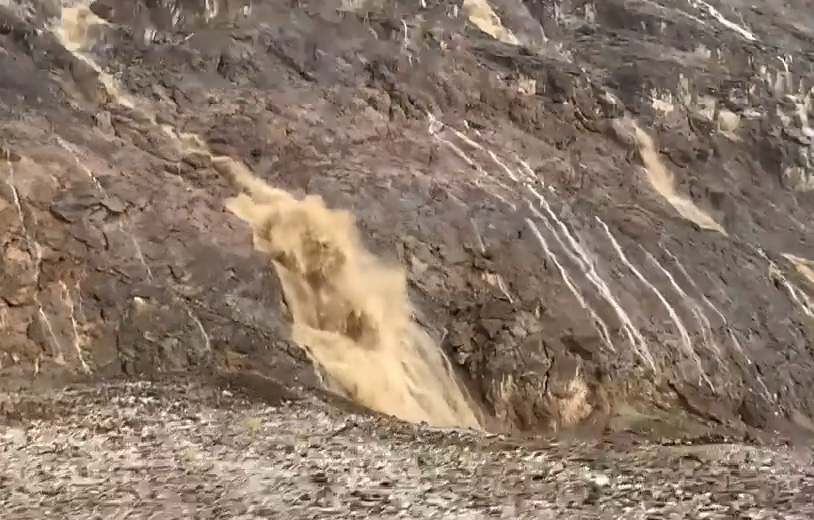 Remnants of a hurricane caused waterfalls to form in the nation’s hottest and driest national park over the weekend, KTLA sister station KLAS reports.

The National Park Service shared a stunning video of the waterfalls in Death Valley, adding that they were due to recent rain from the remnants of Hurricane Kay, which made landfall in Mexico last week.

The temporary waterfalls were spotted just south of Natural Bridge on Badwater Road Sunday afternoon. Flooding in that area caused CA Highway 190 west of Stovepipe Wells and Badwater Road to be completely closed for cleaning.

Many roads in Death Valley remain closed as of Monday, according to the National Park Service. Flooding earlier this year closed a number of other roads as well, many of which are still inaccessible.

Roughly 40 vehicles were blocked by flooding in the Death Valley area Saturday, NPS reports. At one point, a tour bus became stuck in soft sand and blocked traffic for about an hour.

People are being reminded that there is still an active monsoon season and that people should watch for water and debris and not enter canyons during storms.

10 acres of cardboard burns in fire at Riverside-area business

215 Fwy closed north of Perris due to ‘unidentified leak’: RCFD