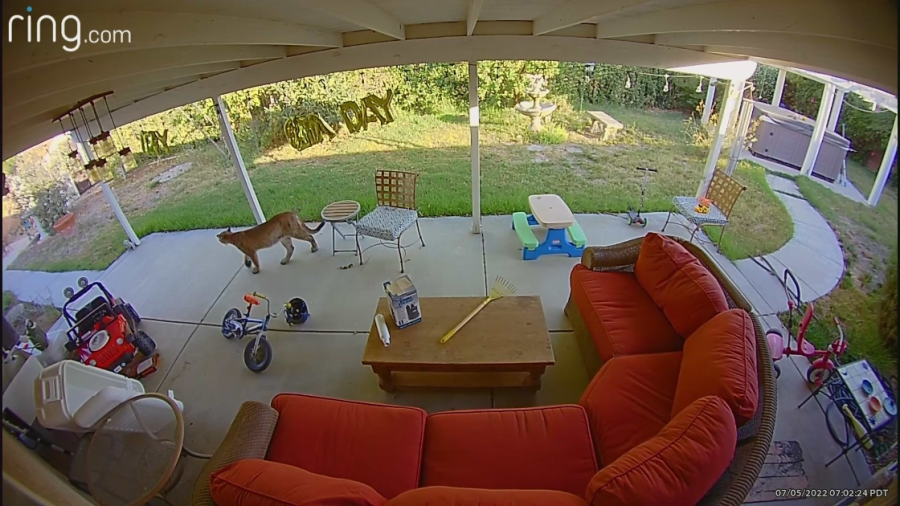 It’s not exactly the kind of guest you want to drop by, but a Simi Valley family had a mountain lion stay in their backyard for an entire day recently.

Jonathan Kline believes the young mountain lion moseyed into their yard after spotting a raccoon early one morning.

He alerted a neighbor who “ran home” after he told her that the mountain lion was in the area.

He figured the animal would move on, but it was still there when he returned home later.

“When I came home about 6:30 p.m., it was still in the backyard just lounging on the grass,” Kline told KTLA.

He doesn’t have a dog, but he has a 5-year-old child and two indoor cats he was concerned about.

“I was terrified because I was just about to open the slider to get more fresh air and found out that it was back there,” he said.

The Kline family alerted the Simi Valley Police Department, but since the mountain lion hadn’t hurt anyone, there was nothing they could do.

Eventually, the big cat moved on. Kline believes it did so overnight, because it was gone by the time his family woke up the next day.

The California Department of Fish and Wildlife could not identify the animal because it did not have a collar and was not being tracked as part of a study.

The Klines live about one mile from the foothills of the city, and it’s not uncommon for mountain lions to make their way into neighborhoods.

In fact, a cougar was spotted near a school in Simi Valley just last month.

Authorities remind residents not to leave trash or pet food in their yard.

One wounded in shooting at Southern California shopping mall