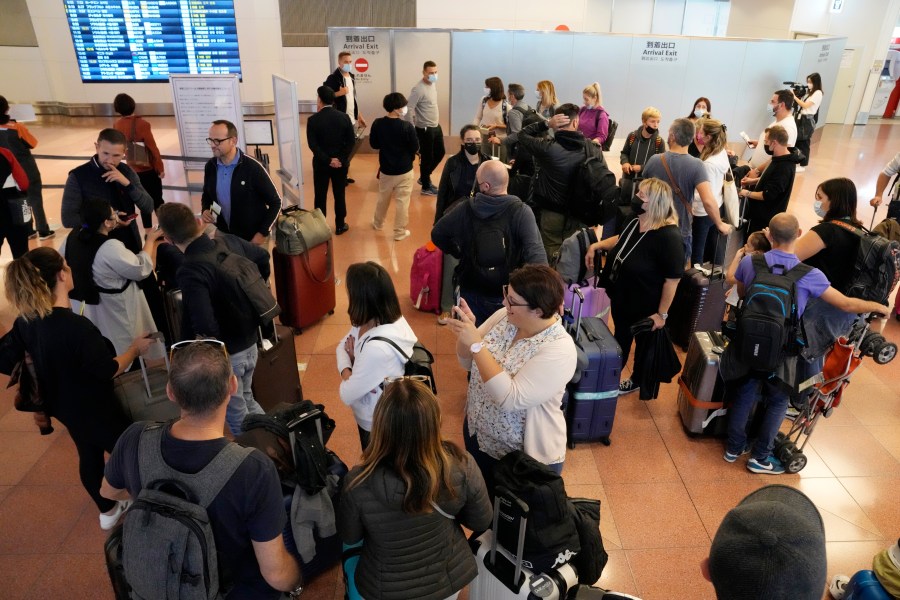 TOKYO (AP) — Eager to admire colorful foliage, eat sushi and go shopping, droves of tourists from abroad started arriving Tuesday in Japan for the first day of lifted border restrictions, which had been in place for more than two years to curb the coronavirus pandemic.

Travelers are expected to deliver a sorely needed 5 trillion yen ($35 billion) boost to the world’s third-largest economy. And the flood of visitors is expected to keep growing.

The daily cap of 50,000 arrivals is gone. Airlines have added flights to respond to the full re-opening of borders. Visa-free travel is back for short-term business and tourism from more than 60 nations.

David Beall, a photographer based in Los Angeles who’s been to Japan 12 times, has already booked a flight, planning to go to Fukui, Kyoto, Osaka, and Tokyo. The last time he was in Japan was in October 2019. But it’s everyday things he’s most looking forward to, like eating Japan’s popular fried pork dish, tonkatsu.

“As cliche as it sounds, just being back in Japan after all this time is what I am most looking forward to. That of course includes hopefully meeting new people, eating the food that I’ve missed like good tonkatsu, being in nature that time of the year, riding the trains,” he said.

As a tip for others planning trips, he recommends getting a Japan Rail Pass and a Suica or some other card that allows cashless payments for easy travel.

Tourists like Beall, numbering about 32 million people before COVID-19, are welcome for good reason. Many will have more spending power because the Japanese yen has declined in recent months in value compared to the U.S. dollar, the euro and other currencies.

The only protocols left for entry are that you must be fully vaccinated with one booster or have a negative PCR test within 72 hours of departure. Then, virtually all visitors from the U.S., the rest of Asia, Europe and South America won’t have to quarantine.

Compared to the most recent surge in Japan, when reported infections nationwide topped 200,000 people in August, both cases and deaths have dwindled. Last week, daily deaths averaged eight people nationwide. Japan has provided free COVID-19 vaccines, especially encouraging the elderly and the medically vulnerable to get inoculated.

But visitors may have to adjust to face masks.

Most Japanese are still wearing masks, just about everywhere. Many stores and restaurants require mask-wearing, as well as sanitizing hands at entrances, though there is talk of relaxing such recommendations in open outdoor spaces. Some establishments close early, or have shuttered completely.

Still, bookings from abroad at Japanese carrier All Nippon Airways Co., or ANA, have already jumped five-fold compared to the previous week, while those flying out of Japan doubled. The surge is coming on top of lesser, more gradual increases recorded the previous week.

Air Canada said bookings for Canadian travel to Japan jumped 51% this month compared to last month, while travelers from Japan to Canada grew 16% over the same period.

The Japanese economy can use the influx of tourist spending.

Fitch Ratings forecast Japan’s real GDP growth at 1.7% in 2022 and 1.3% in 2023, supported by its loose fiscal policy, a recovery in the service sector, and a gradual fix to supply-chain problems, which will boost manufacturing and exports. The reopening to overseas visitors is expected to work as a positive, despite risks from geopolitical tensions and higher prices.

Japan had basically shut its borders to tourists, but started allowing packaged tours in June. Many people opted to wait for open-ended individual travel before getting a plane ticket.

With declining nervousness about the risks of infections, local trips by Japanese are also increasing — encouraged by discounts offered by airlines, bullet trains, onsen hot spring resorts and hotels to jumpstart the ailing travel industry.

Although Japan offers various attractions from the ski slopes of northern Hokkaido to the tropical beaches of Okinawa islands in the south, experts insist the coming months are the best to enjoy what Japan has to offer.

Foliage is turning vibrant colors; the weather is moderate, not freezing, sweltering or humid; seafood, grapes, chestnuts and other culinary delights are fresh and plentiful.

“Now we are all ready to welcome people from abroad,” said Shuso Imada, general manager at the Japan Sake and Shochu Information Center.

Imada’s work is to promote sake rice wine and shochu, made from barley, potatoes or other vegetable, domestically and abroad.

“Autumn is the best season to enjoy Japanese food with sake and shochu,” he said.

Jennifer Newsom to testify against Harvey Weinstein at LA trial

‘These are things I created with love’: Artist in Pacific Palisades asks for return of stolen paintings