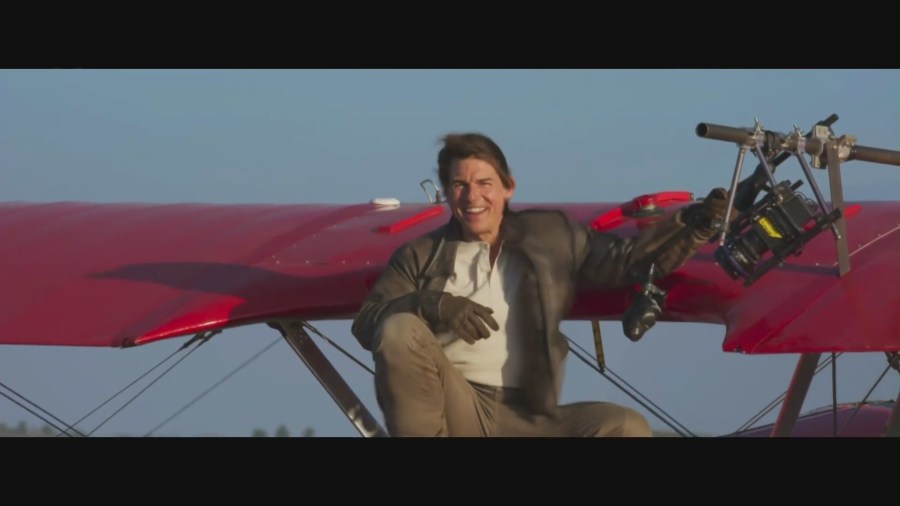 Tom Cruise is known for his performing his own stunts, but this one may be his biggest yet.

Over the weekend, a daring stunt performed by Cruise earlier this year was leaked online.

The “Top Gun: Maverick” star was shooting scenes for the upcoming film, “Mission: Impossible – Dead Reckoning,” when he took a break to greet some big names in the movie business at CinemaCon in April.

The video showed Cruise perched on a World War II biplane over Blyde River Canyon in South Africa, clinging only to the camera rigging.

“Hi everyone. I’m sorry for the extra noise,” the 60-year-old actor hollered while he sat atop the plane.

Cruise is then interrupted by another crew member alerting them that they must finish filming the scenes before the sun sets and they run out of fuel.

Before Cruise flies away, he introduced the trailer for the upcoming “Mission: Impossible” film and a screening of “Top Gun: Maverick” in full.

After Cruise signs off, the pilot quickly turns and dives, with Cruise still clinging just to the camera equipment.

The 78-second clip was not seen by anyone outside the convention until recently.

“Mission: Impossible-Dead Reckoning” is set to hit theaters in July next year.

Cut Your Dreadlocks Or Find A New School

What happens when a restaurant goes tip-free?