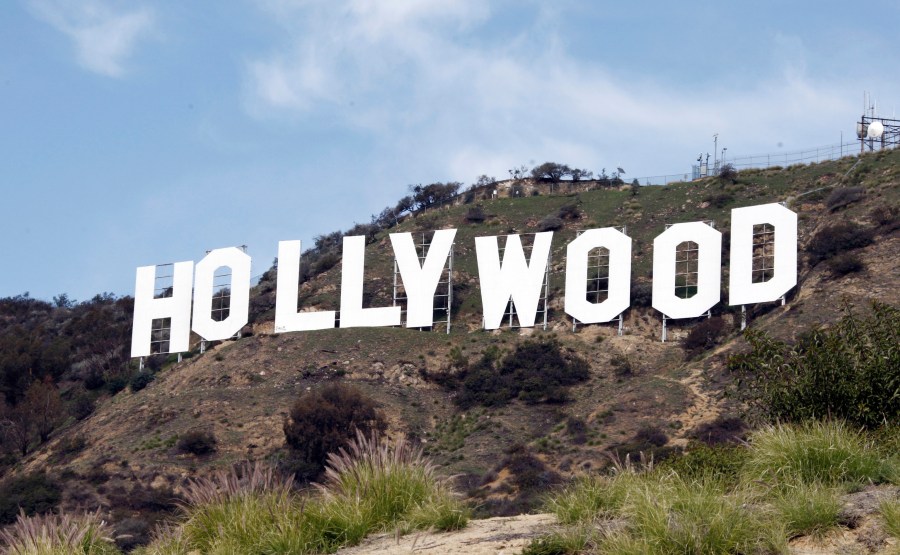 It is arguably the most famous sign in the world.

The “Hollywood” sign overlooking Los Angeles has been an international landmark since its debut in 1923. It is one of the first things tourists want to see, and among the most photographed locations in California.

As the iconic sign undergoes a slight refurbishment for its 100th anniversary, a stroll down memory lane reveals how those nine letters became synonymous with the Golden State.

The Hollywood area was relatively quiet until 1907. During that year, bad weather forced a small movie production company from Chicago to move to California to finish up a shoot. According to the Hollywood Sign website, other companies followed, including the Nestor Film Company, which is regarded as the first real studio in the area, according to a Hollywood sign history timeline.

By 1912, word had traveled that Hollywood was the ideal place to shoot movies. Old barns were converted into sound stages and approximately 15 independent studios were shooting various projects in the city.

By 1915, Hollywood was emerging as an entertainment capital. Actors and actresses came to the city to turn dreams into reality.

Simultaneously, film studios were popping up on every corner, with some companies merging to become heavy hitters in the burgeoning film industry, which amassed 40 million American filmgoers in a span of five years.

Harry Chandler, a former Los Angeles Times publisher, built the “Hollywoodland” sign in 1923 to advertise an upscale real estate development company with the same name. The 45-foot, illuminated billboard was intended to last only 18 months.

At night the sign lit up with four phrases, first lighting up “Holly, “then “wood,” then “land.” In the end, it flashed the entire name “Hollywoodland,” for as far as the eyes could see, according to the History website.

Peg Entwistle was a stage actress from New York who dreamed about making it big in Hollywood. After her dream didn’t come to fruition, the 24-year-old actress took her own life by jumping off the “H” in 1932.

Ironically, according to the History website, a letter was mailed to Entwistle a day before her death, offering her the lead role in a film about a woman who kills herself.

During the 1940s, the sign’s regular upkeep stopped and became the city’s property after the Hollywoodland real estate development went under, mainly due to The Great Depression. The city wanted the destroyed, but the Hollywood Chamber of Commerce stepped in and saved it.

The sign read “OLLYWOODLAND” briefly because the “H” fell over. Eventually, in 1949 the “LAND” portion of the sign was removed and the “Hollywood” portion was restored.

The Hollywood sign was still in bad shape even after a refurbishment during the 1940s. The third “O” tumbled down the hill of Mount Lee, where the sign is located, and some people set the bottom of the second “L” on fire.

The late Hugh Hefner, founder of Playboy Magazine, came to the rescue and helped fund the sign’s refurbishment costs. Hefner held a gala at his mansion and auctioned each letter to celebrity attendees, including musicians Alice Cooper and Gene Autry.

Mt. Lee was bare for three months, but a new sign would soon be erected. The latest Hollywood sign was the same size as its predecessor. Still, it included structural upgrades, like steel footing instead of telephone poles that held up the old sign, according to the History website.

Since then, the sign has received fresh coats of white paint. The most recent paint job was in 2012.

On Jan.1, 1976, Danny Finegood, a former California State University-Northridge student, changed the sign to “Hollyweed” to celebrate a state law decriminalizing marijuana, and for an art project. According to History, he got an “A.”

Finegood changed the sign three more times to read: “Holywood” to celebrate Easter, “Ollywood” to protest Oliver North’s Iran-Contra testimony and “Oil War” to protest the Persian Gulf War. Other people have changed the sign before football games to support the presidency of Ross Perot, a 1992 third-party candidate.

In 2022, the sign was temporarily changed to “Rams House” after the Los Angeles Rams won the Super Bowl.