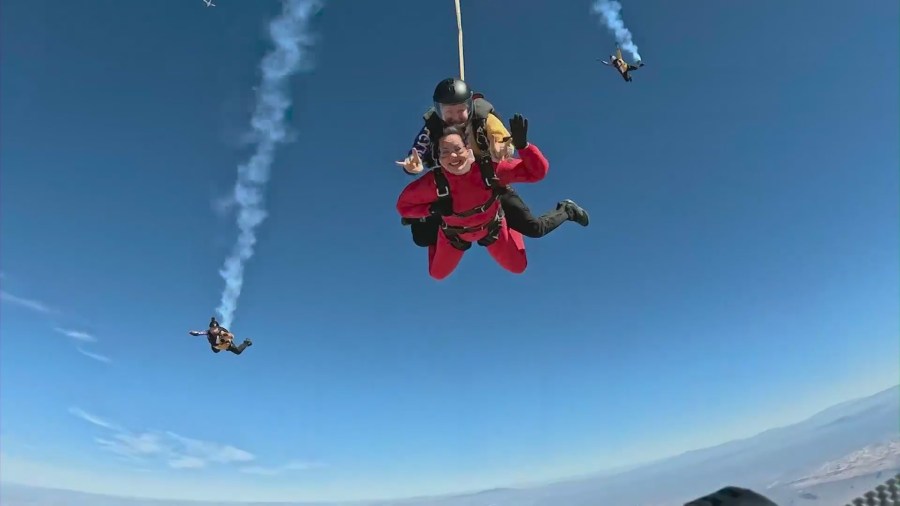 Female daredevils from all around the world are in Arizona, flying high in their goal to break a skydiving record.

KTLA’s Cher Calvin joined the women in Eloy, Arizona to watch them work, and get her own taste of the thrill.

Project 19 was inspired by the centennial of the 19th Amendment, which granted women the right to vote.

One hundred skydivers will take to the skies before doing a freefall world record, holding hands head down in a vertical orientation flying at high speed towards Earth.

Organizers of the jump say women are severely underrepresented in the sport of skydiving, and they hope the record-breaking feat can help change that.

Numerous practice jumps are required before the record attempt and each one is intricately dissected. Cher Calvin rode copilot during one of the practice runs before suiting up for her own jump.

Cher jumped with tandem instructor Keri Bell, who has more than 15,000 jumps under her belt after breaking into the sport at 16.

Bell said much of the thrill with skydiving comes from introducing new people to the sport.

After landing back on solid ground, Cher described the experience as “most remarkable thing I’ve ever done in my entire life.”

New Honda Self-Driving Vehicle May Include a Sony PS5

Man Accused Of Murdering His Online Girlfriend & Harvesting Her Organs

Another storm headed for Southern California