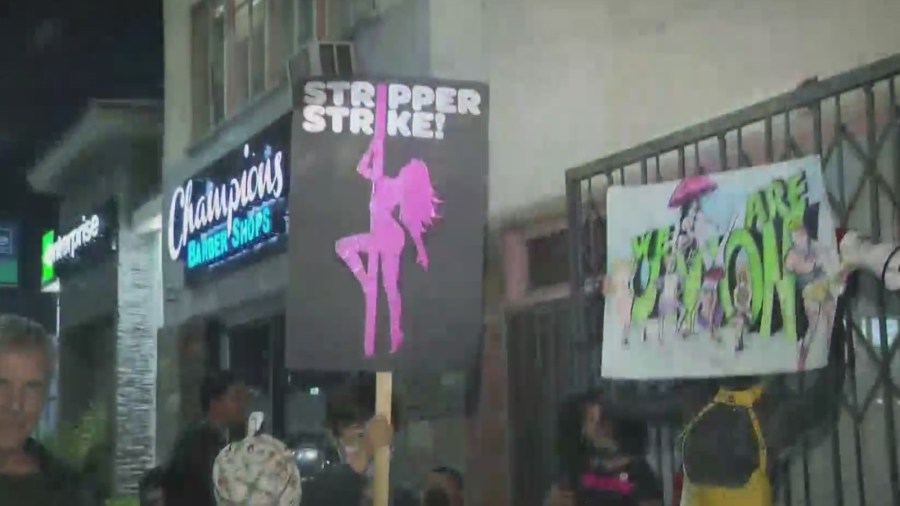 Strippers who would normally be inside the Star Garden Topless Dive Bar entertaining were instead outside on the sidewalk picketing. For the last five months, it’s become a common occurrence outside the club, but now with the backing of a major national union, they are one step closer to making history.

The dancers, alongside union members from the Actors Equity Association, gathered for a rally Friday as they move closer to becoming unionized.

“Many of us keep this profession a secret but today is a day of reckoning for this outdated modality,” said a speaker who identified herself as Reagan, a dancer at the club.

More than 50 supporters showed up to back the dancers with signs, buttons and chants.

Joel Cohen with the International Alliance of Theatrical Stage Employees (IATSE Local 800) attended the rally to show support of the union effort.

“Everybody has the right to unionize and come together and request decent living standards and wages,” Cohen said.

Actors Equity Association President Kate Shindle says now that the National Labor Relations Petition Board paperwork has been filed, the workers will soon vote to be represented by AEA.

“We win the election, then comes the work of actually negotiating the contract,” Shindle said.

The union represents more than 51,000 actors and stage managers in live theaters, but for the first time, strippers could be members.

The dancers have accused the club’s management of taking money and allowing strippers to perform in unsafe working conditions. A dancer who goes by the name Velveeta believes the other performers won’t mind paying dues for better protection.

The rally eventually turned to a protest outside Star Garden, where for the last 5 months, some of the dancers have been out of a job.

Shindle feels the eventual vote will pass and the dancers will be back on stage, but this time with the union’s backing.

“[Management] work so hard to break solidarity,” Shindle said. “Fortunately this is a really powerful and passionate group of workers. I think they are going to have some things to say about that.”

The performers and the union are waiting on a offical vote through the National Labor Relations Board. If it passes, Star Garden will be home to the only unionized strippers in the nation.

KTLA reached out to the club’s management for a statement, but did not hear back.

‘It has never been this bad, ever’: Woman robbed at gunpoint near jewelry store in downtown Los Angeles