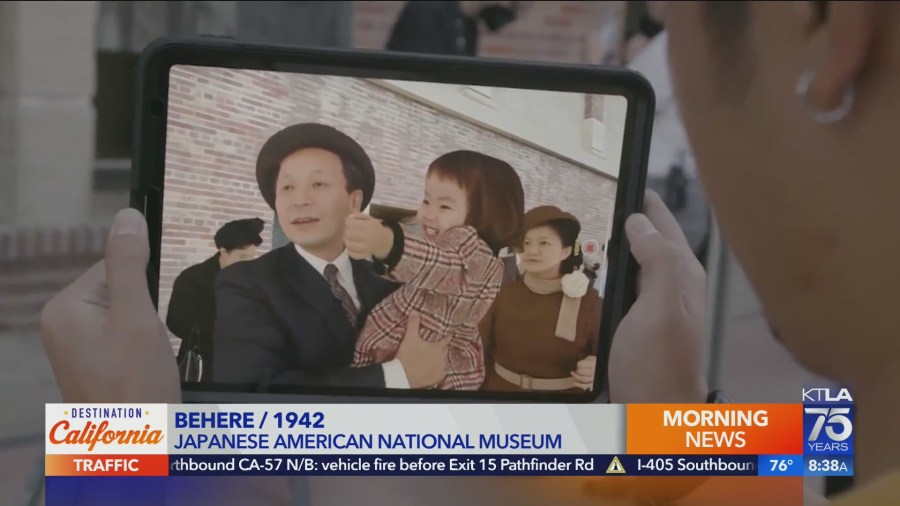 It takes visitors back to the day when the lives of Japanese-Americans in L.A. were forever changed, and features the actual historic photographs from 1942.

What makes this so unique and unlike anything you’ve ever seen at a museum before, is you are immersed in the historic moment. This is made possible by pioneering a digital media artist, Masaki Fujihata, who takes the actual historic photographs and digitally takes you to that time.

In Fujihata’s digital masterpiece, the people you see in the experience were actually relocated when they were children.

“You’ll notice, though, in these pictures, photographs, everybody’s dressed up. The women are wearing the nicest coats and hats, the men are wearing nice suits and coats, and the children are all dressed up with their toys, dolls,” explained June Aochi Berk of the Japanese American National Museum. “It’s because, I realize, like my parents, they never said anything. They just said, ‘oh, you’re going to go on a bus trip. Oh, you’re going to go on a train trip to Arkansas.’ You know, they made it out to be a fun thing for us children and so on these pictures, you see them getting on these buses getting on these trains, quietly, all dressed up like they’re going to go to some kind of event or some kind of church events.”

Aochi Berk went on to explain how staying calm was important because she said her parents and other children’s parents didn’t want the youngsters to be afraid or frightened.

They wanted to be in order for what was going to be the unknown.

To learn more about the images, head here.