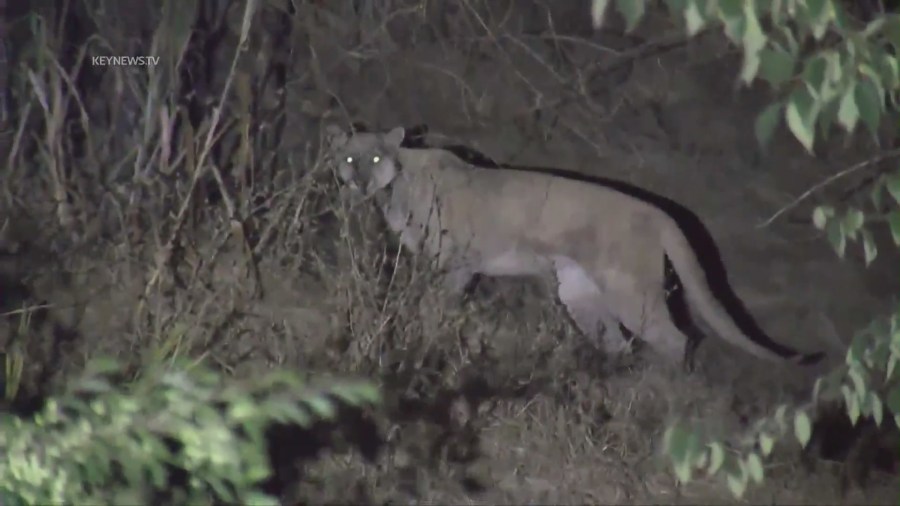 A horrifying scene played out in the Hollywood Hills when a dog walker came face-to-face with a mountain lion, who was likely P-22.

It happened in a residential neighborhood in the early evening hours.

The dog’s owner says the encounter should serve as a warning to others to be aware of the dangers of wildlife lurking in the area.

The mountain lion was captured on security footage emerging from the bushes and onto a residential street near the Hollywood Reservoir.

Around the same time, the dog walker, who is choosing to remain anonymous, was walking two small dogs near Creston and Durand Drives.

The mountain lion is seen suddenly stopping and assuming a crouch position, a reaction to spotting the dogs.

“I felt the tug and I heard Piper squeal,” the man said of the leashed dog. “I turn around and I just saw a face. I didn’t know what it was.”

It was likely P-22, an 11-year-old puma known to live and prowl around Griffith Park.

“It was like a two or three second struggle,” said the man. “He had Piper in his mouth. He didn’t growl at all. I didn’t even hear him. I never had a chance.”

Piper did not survive, but the second dog the man was walking was unharmed.

“My wife and I got Piper in 2014,” said Daniel Jimenez, Piper’s owner. “We rescued her and she was just the sweetest dog. We’re just devastated at the loss of our little dog.”

Jimenez was out celebrating his daughter’s birthday on the night Piper was killed. He recalls receiving a bizarre text from the dogwalker that said, “‘The mountain lion attacked and took away your dog. Killed your dog.’ We thought it was a joke, but it turned out it was real and we were just shocked,” said Jimenez.

Jimenez doesn’t blame the mountain lion, saying it was only doing what wild animals naturally do — hunt for food.

But the incident occurred in the early evening hours when many people typically walk their dogs. Jimenez says this is a public safety issue that locals should be aware of.

“I don’t want anything bad to happen to P-22,” said Jimenez. “I just want people to be safe out there so that nothing like this happens again.”

The 10 best dive bars in California, according to Yelp

Fentanyl’s impact plainly visible on the streets of Los Angeles