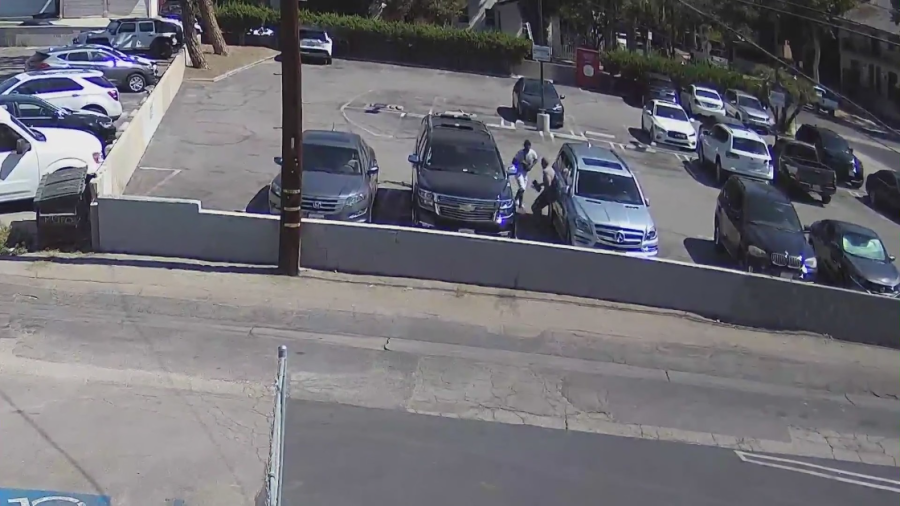 A man who had just walked out of a bank in Sherman Oaks Tuesday was robbed of $10,000 in a caught-on-video scuffle.

The incident occurred in the parking lot of a Wells Fargo along the 14600 block of Ventura Boulevard around 10:30 a.m. Tuesday, according to the Los Angeles Police Department.

The suspect’s vehicle was parked in the lot for about 20 minutes before the victim returned to his car.

The assailant then got out from the back seat of the car, pointed a pistol at the victim and demanded his money.

“I was just like ‘don’t shoot, don’t shoot’” the victim, who only wanted to be identified as William, told KTLA. “He stood with the gun right in my face.”

The victim apparently threw the bag full of money in an attempt to get away, and even jumped a retaining wall, but the suspect ran back to a dark-colored Mercedes sedan with the victim’s cash and got away.

William said he had been in the bank for 40 minutes and that, while other people left the bank, it appears the robbers were waiting for him.

“Who knows what happened,” said Williams, who ended up with scratches on his arm and foot from the confrontation.

He was told that a man who appears to work as a security guard at the location is more of a “door man” who is told not to intervene.

“This is a severe security risk, and somebody could have died yesterday because they didn’t have any particular interest in protecting their customers,” John said.

In a statement, Wells Fargo told KTLA the safety of customers is a top priority, and that they are cooperating with the investigation.

Authorities believe there are two people involved in the robbery; the driver and the assailant.

The man who stole the victim’s property is described as wearing a white shorts, white shoes and a black crossover bag.

Driver killed in crash outside Disneyland

Which streaming service sounds best? Our tech expert weighs in