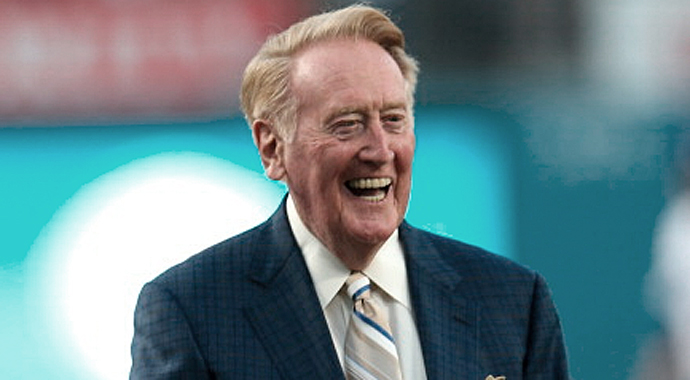 Vin Scully, who for more than 60 years was the voice of Los Angeles Dodgers baseball, has died.

The Dodgers announced Scully’s death on social media, calling the incomparable legend of the broadcast booth, “the heartbeat of the Dodgers.”

“He was the voice of the Dodgers, and so much more. He was their conscience, their poet laureate, capturing their beauty and chronicling their glory from Jackie Robinson to Sandy Koufax, Kirk Gibson to Clayton Kershaw,” the Dodgers wrote.

Scully retired from calling Dodgers games after the 2016 season. He spent 67 seasons with the team, beginning back when they were known as the Brooklyn Dodgers.

He was a MLB Hall of Fame inductee in the 1980s, becoming one of only a handful of announcers to receive the honor. Earlier this year, he was awarded the Baseball Digest lifetime achievement award.

“We have lost an icon,” said Dodger President & CEO Stan Kasten. “The Dodgers’ Vin Scully was one of the greatest voices in all of sports. He was a giant of a man, not only as a broadcaster, but as a humanitarian. He loved people. He loved life. He loved baseball and the Dodgers. And he loved his family. His voice will always be heard and etched in all of our minds forever. I know he was looking forward to joining the love of his life, Sandi. Our thoughts and prayers go out to his family during this very difficult time. Vin will be truly missed.”

Vin Scully shared his love of baseball, life in 2020 interview

Travelers are getting a break on flight prices – but will they keep going down?