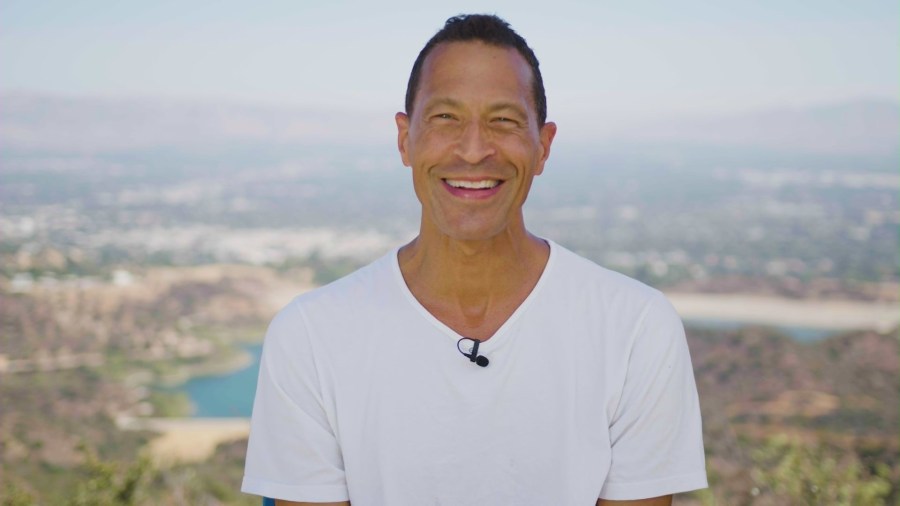 He lived in Tarzana when he was just a tiny tot, then he and his family moved to Encino, where he spent most of his childhood.

Kaj has three sisters. They’re very close and talk quite frequently, but growing up, there were some difficulties.

“It was tough to get bathroom time,” he laughed. “Once I did, we figured it out.”

During his school years, Kaj was a pretty good student until he discovered girls and surfing. Since surfing is usually done in the morning, he admitted he would ditch class to catch or wave to two at the beach.

Years later, near the beach is where he met his wife, Carolina.

He was living in Santa Monica when he decided to take a yoga class at a nearby studio. He and his friends noticed the women coming in and out of the classes. Carolina happened to work at the studio and the rest is history.

“She’s my best friend in the world,” he gushed. “We travel, we have three great children, we just complement each other.”

Kaj’s parents still live in the valley and he said his children are “best friends” with their grandparents, which he confessed is a “blessing.”

He visits his parents whenever he can, especially when he’s out mountain biking.

When it comes to the great outdoors, Kaj just can’t get enough of it.

“Anything that has to do with nature, being on the water, being up in the mountains. Those are the two power sources that I find in my life that give me a lot of rejuvenation and make me feel better,” he said.

Kaj revealed to KTLA one of his favorite sites in the Southland, the historic Nike Missile Control Site LA-96.

“It’s a place I’ve been taking a look at since I was a little kid. I could see it from my bedroom window, and it always intrigued me,” he explained. “The most important thing for me has been the quiet. It’s an area where I can meditate.”

One thing is for sure, he is proud to be an Angeleno.

“I appreciate Los Angeles because we’ve got the best weather, probably in the world,” he said. “Not only that, we’ve got really great people who live in this community. There’s no other community like it in the universe.”

Track the stories online at ktla.com/mystory.

Coolio dead at 59: What we know