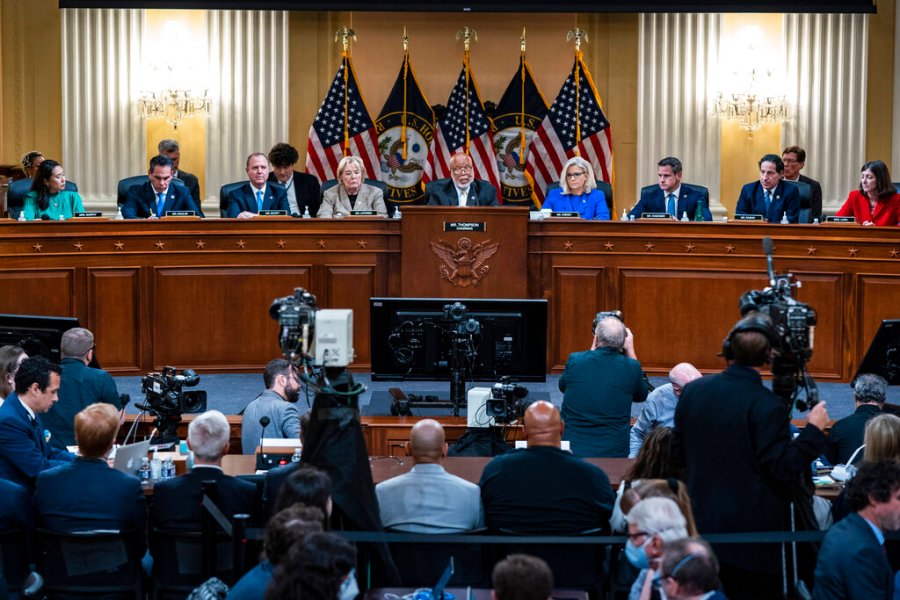 (NewsNation) — Donald Trump’s former campaign manager Bill Stepien abruptly pulled out of an appearance before the House committee investigating the Jan. 6 riot at the Capitol on Monday.

Stepien was expected to be a key witness and will no longer be among those testifying. He was originally subpoenaed for his public testimony.

The panel said his appearance was canceled due to a “family emergency” and was told on Monday morning that Stepien’s wife was in labor, according to a person briefed on the matter, who spoke on the condition of anonymity ahead of the hearing.

The committee said Stepien’s counsel will appear and make a statement on the record.

The committee pushed back the hearing’s start time by 30 minutes as lawmakers and staff scrambled for the change of plans.

NewsNation will stream the Jan. 6 hearing at 10:30 a.m. ET in a player at the top of the page. Hear from Stirewalt after his testimony only on NewsNation.

The next round of hearings won’t take place in prime time as the debut Thursday, but lawmakers are expected to go into greater detail about specific aspects of the insurrection.

Members of the committee said Sunday they have uncovered enough evidence for the Justice Department to consider an unprecedented criminal indictment against former President Trump.

Rep. Liz Cheney of Wyoming, the Republican vice-chair of the committee, said lawmakers will present evidence Monday showing that Trump “engaged in a massive effort to spread false and fraudulent information” that the election had been stolen — even though advisers and allies told him repeatedly he had lost.

New witnesses and evidence are expected as the Jan. 6 committee attempts to tie the Capitol Riot to Trump.

NewsNation’s political editor Chris Stirewalt revealed on “Morning in America” that he will be among those to testify during Monday’s Jan. 6 hearing. Stirewalt disclosed he was called to testify before the committee but was unable to comment on what his testimony would include, or why he was even called to testify.

Pak was the top federal prosecutor in Atlanta who left his position on Jan 4, 2021, a day after an audio recording was made public in which Trump called him a “never-Trumper.”

Lawmakers indicated that perhaps their most important audience member over the course of the hearings may be Attorney General Merrick Garland, who must decide whether his department can and should prosecute Trump. They left no doubt as to their own view of whether the evidence is sufficient to proceed.

“Once the evidence is accumulated by the Justice Department, it needs to make a decision about whether it can prove to a jury beyond a reasonable doubt the president’s guilt or anyone else’s,” Rep. Adam Schiff of California said. “But they need to be investigated if there’s credible evidence, which I think there is.”


Jan. 6 committee: Trump ‘lit the flame of the attack’

Rep. Elaine Luria (D-Va.) said on NBC’s “Meet the Press” Sunday the upcoming hearings will focus on Trump’s “dereliction of duty” and his attempts to overturn the results of the 2020 election.

“We’ve pieced together a very comprehensive tick-tock timeline of what he did,” she said.

Committee members said they would present clear evidence that “multiple” GOP lawmakers, including Rep. Scott Perry, R-Pa., had sought a pardon from Trump, which would protect him from prosecution. Perry on Friday denied he ever did so, calling the assertion an “absolute, shameless, and soulless lie.”

Monday’s hearing takes place just days after the first in a series of hearings beginning last week that laid out the committee’s initial findings gathered over an 11-month investigation.

Thursday’s hearing lasted approximately 90 minutes and was watched by roughly 20 million people across the six major American broadcast and cable networks that aired the program.


Could any charges come from the Jan. 6 hearings?

During the prime-time hearing, Americans watched footage of violent rioters infiltrating the country’s symbol of democracy and heard testimony from a Capitol Police officer knocked unconscious and a filmmaker documenting the group who first breached Capitol security that day.

The Jan. 6 hearings have been decried as “political theater” by the GOP, and while there are some strong allegations being made by some of those testifying, the question in many viewers’ minds is whether or not any actual charges could come out of the proceedings.

The Associated Press and the Hill contributed to this report.

Release Date Out! Trailer Hints At A New Danger

More than 1 in 5 US adults don’t want children

What will it take to get Brittney Griner home?