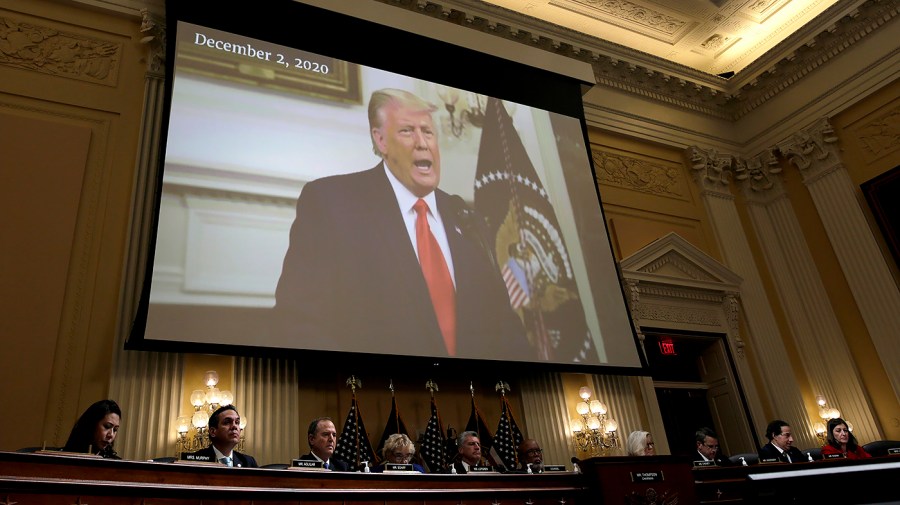 The House committee investigating the Jan. 6 attack on the Capitol took the remarkable step Thursday of voting to subpoena former President Trump during what could be its final public hearing.

The televised vote comes after the panel wavered for months on whether it would subpoena the bombastic former president, who has frequently criticized the investigation as a partisan witch hunt designed to hurt him politically.

“He is the one person at the center of the story of what happened on Jan. 6. So we want to hear from him. The committee needs to do everything in our power to tell the most complete story possible and provide recommendations to help ensure that nothing like Jan. 6 ever happens again. We need to be fair and thorough in getting the full context for the evidence we’ve obtained,” Chair Bennie Thomspon (D-Miss.) said shortly before the panel cast a unanimous 9-0 vote in favor of issuing the subpoena.

“We also recognize that a subpoena to a former president is a serious and extraordinary action. That’s why we want to take this in full view of the American people.”

The move marks a major escalation in the effort to hold Trump accountable for the violence at the Capitol on Jan. 6, 2021 — a riot the committee contends was orchestrated by the former president.

The subpoena is not likely to yield fruit, however, as Trump has remained defiant throughout the 16-month investigation. The former president is expected to challenge the subpoena in the courts, a process that is certain to extend beyond the life of the special committee, which is set to end later this year.

The motion to subpoena Trump was introduced by Vice Chair Liz Cheney (R-Wyo.), who lost her bid for reelection after becoming a foil to the former president and a regular debunker to his frequent claims of election fraud.

Cheney, vice chair of the committee, said that while investigators have “sufficient information” to weigh criminal referrals and make election reform recommendations to Congress, “a key task remains.”

“We must seek the testimony, under oath, of Jan. 6’s central player,” she said.

Cheney then highlighted the figures in Trump’s inner circle who have appeared before the committee but revealed no information about their direct dealings with Trump, choosing instead to plead their Fifth Amendment right against self-incrimination.

That list includes Roger Stone, a Trump confidant; Michael Flynn, his former national security adviser; and John Eastman, a conservative lawyer who had drafted the dubious legal rationale on which the “stop the steal” movement rested.

Cheney noted that the Justice Department is still investigating the roles all those figures played in Jan. 6. Meantime, she said, “we are obligated to seek answers directly from the man who sent this all in motion.”

“And every American is entitled to those answers.”

As recently as a few weeks ago, some members of the committee had acknowledged that a subpoena — for either Trump or his former Vice President Mike Pence — was likely futile.

“If we were trying to get into a subpoena fight with either the former vice president or the former president, that litigation could not be concluded during the life of this Congress. And I think the former president has made clear that he has no intention of coming in,” Rep. Zoe Lofgren (D-Calif.) told CNN late last month. “So while we’d like to hear from both of them, I’m not expecting that we necessarily will.”

But by issuing a subpoena, the committee likely lobs a new legal matter at Trump. If Trump declined to comply with the compulsory order to testify, the committee and then the House could vote on whether to send a contempt of Congress referral to the Justice Department.

The panel and the House have four times voted to hold in contempt of congress those who have refused to comply with its subpoena. But the Justice Department has only acted on two of those, bringing charges against one-time White House strategist Steve Bannon and White House advisor Peter Navarro. Bannon faces sentencing next week.

The panel spent months deliberating about whether to subpoena Pence, but those initial discussions appear to have petered out.

“The vice president said publicly that he thought he might want to come in. And so we were very encouraged by that. But since that time, his people have walked it back,” Lofgren said in the prior interview.

“The need for this committee to hear from Donald Trump goes beyond fact-finding,” Thompson said.

“This is a question about accountability to the American people. He must be accountable.”

Republicans plan to investigate Fauci after midterms, if…