Is your feed nothing but Instafest posters? You have this USC student to thank 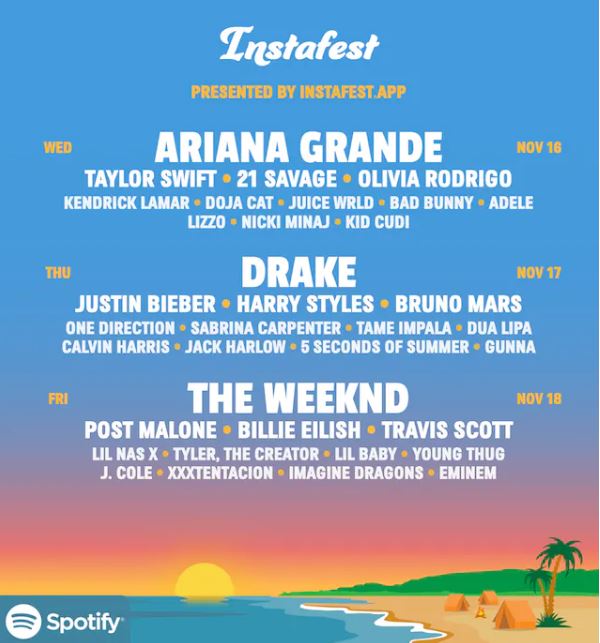 A musical blast from the past!

Anshay Saboo, 20, a computer science major at the University of Southern California, created a new website that allows Spotify listeners to reminisce on their music choices from the year.

Instafest allows users to connect their Spotify account and automatically generate their ideal music festival lineup based on their listening habits from the music service.

The website has gone viral on social media since debuting last week. According to Saboo, over 6 million users have visited the website.

“It’s been an incredible response, way bigger than I was ever expecting,” Saboo said. “It’s been incredible to see how much it has grown in such a short span of time.”

The 20-year-old came up with the idea for the Instafest website earlier this year when people began sharing what music festivals they would be attending on social media.

The posts made Saboo imagine what his dream music festival lineup would be if given the opportunity to create one. He knew he could connect Spotify to the website to make music festival graphics that show someone’s top artists.

From there, the idea just clicked.

Saboo created a prototype within a day and continued refining the website throughout the next couple of months.

“I’ve spent a lot of time making sure the design is something I was happy with and making sure that the user experience was on point,” Saboo said. “I wanted the website to be easy to use and share.”

Since launching the website, celebrities like Questlove, director Edgar Wright, and rapper 24kGoldn have shared their Instafest lists.

Saboo also plans to expand the website to include Apple Music, YouTube Music and other music streaming sites and add features to improve the creation and sharing experience for users.

Recently, he launched the “Basic Score” feature, which allows site visitors to earn a score from 1 to 100 based on the popularity of the artists on their lists.

“If you have a lot of popular artists on your festival, then you will have a 100 basic score, but if you listen to small, niche artists with not a lot of listeners, your score will be lower,” Saboo said.

So far, the website creator has seen users post their “basic scores” along with the music festival graphic.

Some people have compared Saboo’s website to Spotify’s Wrapped list, a collection of the songs and artists users have listened to throughout the year, but the college student doesn’t take offense to that. Instead, he feels honored by the comparison.

“It feels really incredible to be mentioned alongside something as big as Spotify Wrapped,” Saboo said.

‘Grease’ returns to theaters for $5 in honor of Olivia Newton-John; AMC to donate to breast cancer research

Five races where Democrats could pull off surprise wins