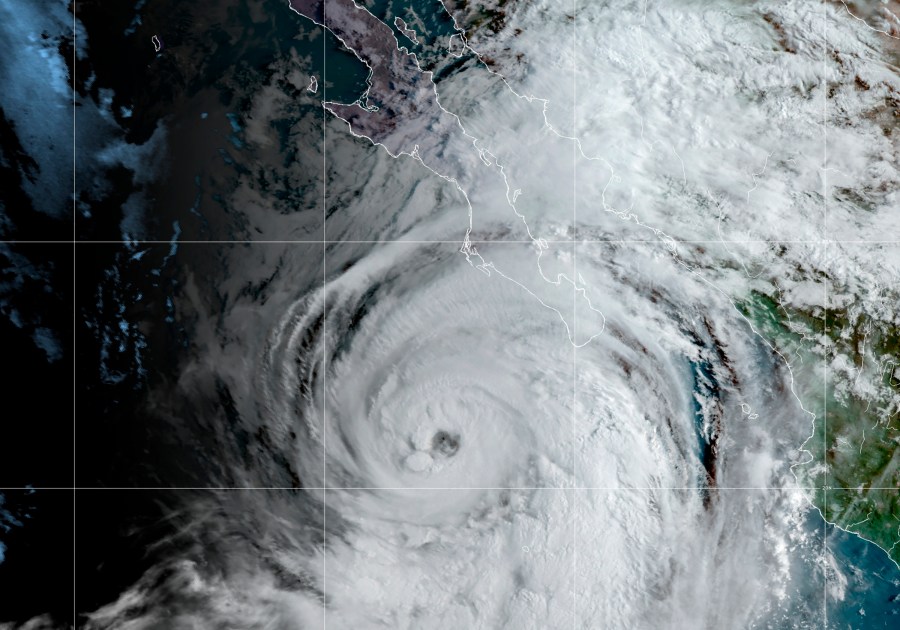 Hurricane Kay stayed out in the Pacific on Wednesday as it began lashing Mexico’s Baja California Peninsula, where authorities prepared by opening shelters and closing some roads.

Forecasters said there was a chance outer bands of the big storm could bring heavy rain — and possibly flash floods — to parts of scorched Southern California and southwestern Arizona on Friday night and Saturday.

Kay’s maximum sustained winds were 100 mph (155 kph) in early evening, with forecasters saying it could brush the middle portion of the Baja peninsula Thursday or Friday.

The U.S. National Hurricane Center in Miami said Kay was centered about 200 miles (320 kilometers) west-southwest of the southern tip of the Baja peninsula. Kay was moving north-northwest at 13 mph (20 kph).

A hurricane warning was issued for a sparsely populated stretch of the peninsula around Bahia Asuncion and the state government of Baja California Sur announced it was opening shelters for people who need to evacuate. It said some creeks were already rising and closed some roads.

Forecasters expected Kay to stay offshore as it moves more northward, roughly parallel to the coast. It was an expansive storm, with tropical storm-force winds extending up to 230 miles (370 kilometers) from the center.

Heavy rain fell on Los Cabos at the southern tip of the peninsula. Mayor Oscar Leggs Castro said there were already more than 800 people in shelters in the twin resort destinations.

Long lines of cars waited to fill up at gas stations. Nonessential businesses were closed and some airlines cancelled flights.

Landslides reportedly cut some roadways on the peninsula, but there were no reports of injuries.

Meanwhile, Hurricane Earl churned through open waters in the Atlantic Ocean and was forecast to pass just southeast of Bermuda on Thursday night as a Category 3 storm.

“Bermuda will certainly feel the effects from Earl, so we must guard against complacency,” he said.

Earl was centered about 390 miles (625 kilometers) south of Bermuda late Wednesday afternoon. Its maximum sustained winds had strengthened to 90 mph (150 kph) and it was moving north at 8 mph (13 kph).

Farther out, Hurricane Danielle was kicking up high seas from its center some 625 miles (1,010 kilometers) northwest of the Azores. It had maximum sustained winds of 80 mph (130 kph).

The Top 10 most destructive California wildfires since 2000

Respiratory illness among children could lead to polio-like condition