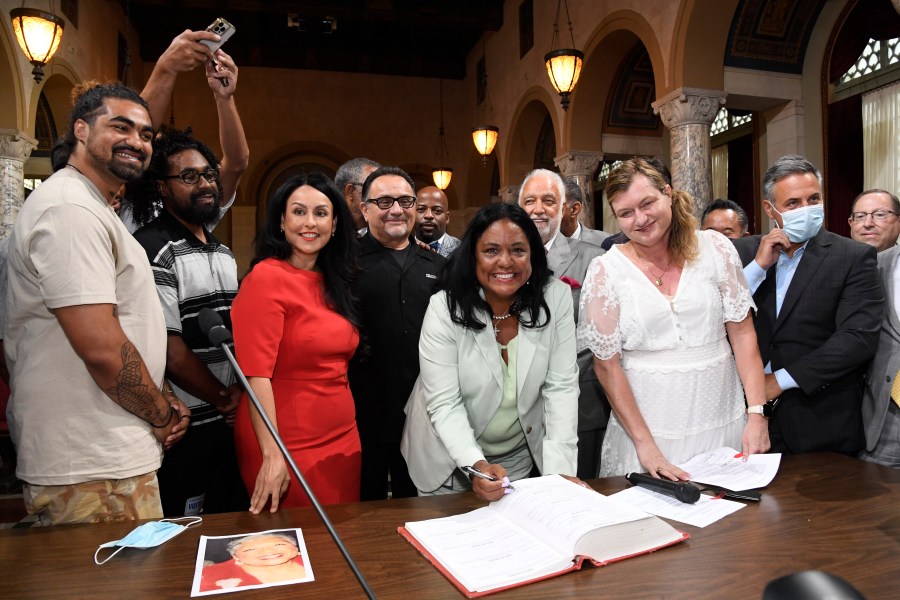 The Los Angeles City Council officially has its newest member, a former political aide whose selection to replace a council member embroiled in a federal criminal case is breaking boundaries.

With a 12-2 vote, the council voted to confirm Heather Hutt as the interim council member for the 10th District, the Los Angeles Times reported.

Hutt replaces Mark Ridley-Thomas, who was suspended after he was indicted on federal corruption charges. Former Councilman Herb Wesson had been appointed to the seat earlier this year, but legal challenges ultimately led to his removal.

On Twitter, Councilmember Curren Price Jr. of the 9th District praised his new colleague as she “made history in Los Angeles, becoming the first Black woman to serve as Councilwoman for the 10th District.”

“Congratulations Heather, you have just opened the door to legions of girls of color to dream bigger than they could have ever imagined,” he added.

“Today we made history,” Martinez said. “The Council confirmed the appointment of the first Black woman to represent the 10th District, a seat that was once held by Tom Bradley and a district that is central to Los Angeles’ story. I want to thank the dedicated residents of the 10th who came to Council, called, emailed, and sent letters demanding representation and telling me who you wanted to represent you. Heather is stepping up to serve the very community she grew up in and I have no doubt that she will make her community proud.”

In Martinez’s statement, Hutt expressed her thanks to her constituents.

“I care deeply about this district, it is my home, and I cannot begin to describe how much I appreciate this opportunity to serve,” said Hutt. “Thank you to my neighbors throughout the district for supporting me. I will work hard. I will be diligent. I will be available. Nothing is too big and nothing is too small. As my prior bosses have told me, our jobs are for constituents. That’s why we’re here. And that’s what we’ll do – continue to serve.”

Snuggle Up In Giuseppe Zanotti’s New Line of Bedroom Slippers

Actress Anne Heche behind the wheel in Mar Vista crash