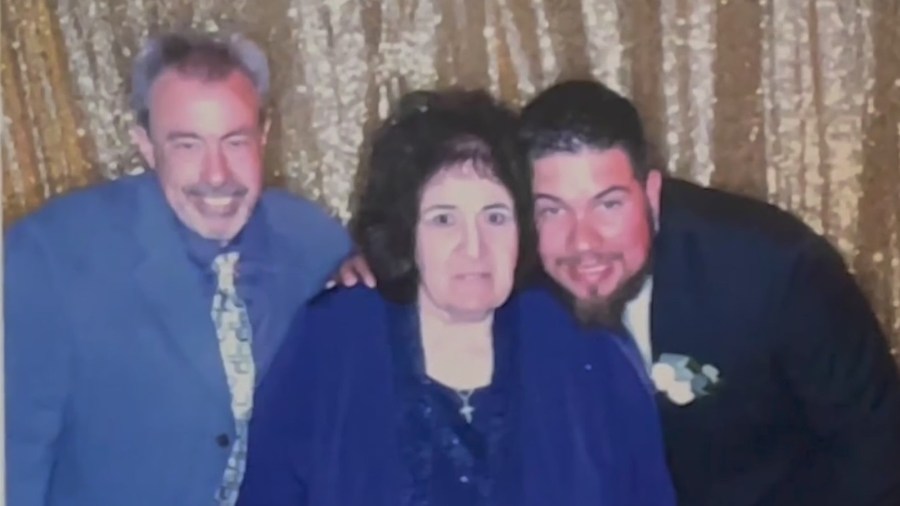 Police in the Inland Empire and Orange County are still searching for the convenience store gunman responsible for Monday’s deadly crime spree.

Two people died and several others injured, including a man in La Habra who family members said was just minding his own business, sitting inside his car when the suspect fired at him through the passenger-side window.

Georgan Browning said she received an early morning call from her husband Monday. It was a call she never could have imagined.

“He said, ‘honey,’ and I knew something was wrong because it was like he had a ton of stuff in his mouth,” Browning told KTLA.

Her husband, Russell, was reaching out to her from the 7-Eleven parking lot in La Habra moments after he was shot by the now-wanted gunman.

Russell told his wife not to worry if he died, telling her, “I know where I’m going.”

Georgan said a La Habra police officer then spoke to her over the phone, telling her that her husband had been shot in the face and was being taken to the hospital.

“I just said, ‘please tell him I love him and we’ll be there,’” she told the officer on the other end of the line.

Georgan and Brandon, the couple’s son, are now searching for answers. They say Russell had just stopped to get donuts and milk.

His car — still with shattered glass inside from the day before — now parked at the family’s home Tuesday.

Russell was one of several victims in a violent string of robberies at 7-Eleven stores across the Southland.

Police were called out to the La Habra convenience store on East Whittier Boulevard around 4:55 a.m. where they found two victims, including Russell, suffering from gunshot wounds.

There were a total of six different robberies, starting in Ontario around midnight before moving through Upland, Riverside, Santa Ana, Brea and La Habra.

Two people were killed, a clerk at the Brea location and a customer in Santa Ana. Three others were injured.

Ryan Railsback of the Riverside Police Department said investigators were finally able to confirm that the suspect in the Riverside robbery is the same wanted for the five other robberies. Now, Los Angeles police detectives are investigating the possibility that a string of armed robberies in the San Fernando Valley are also connected to the same suspect.

As the investigation continues to be a top priority for authorities across Southern California, for the Browning family, they’re just hoping that their loved one recovers and receives some justice.

The Brownings say Russell’s mouth is currently wired shut as he heals from the gunshot wound to his face.

“In some way, I wish I could take his place,” Brandon Browning said. “He’s been through enough in is life. He doesn’t deserve to go through that.”

The Browning family has set up a GoFundMe page to help pay for Russell’s medical expenses.

New Boy In The Villa, Someone Leaves The Island!

These American staple foods are banned in other countries