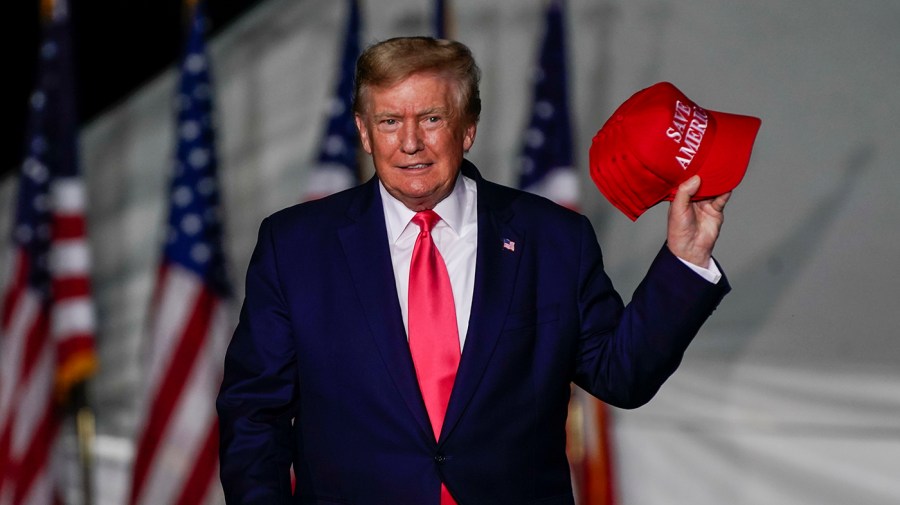 (The Hill) – A redacted FBI affidavit used to convince a judge for a search warrant for former President Trump’s Florida home noted that authorities found 184 classified documents in their initial review of recovered boxes in an effort that began just a few months after he left office.

Authorities’ concern that Trump may have additional national security information at his private residence was spurred by a review of the 15 boxes recovered by the National Archives in January.

The affidavit indicates that among the 184 documents were 25 that contained top secret information, including those gained from “clandestine human sources,” information prohibited from being shared with foreign governments, and information obtained by monitoring “foreign communications signals.”

The 28-page affidavit contains numerous redactions but indicates authorities believed “evidence, contraband, fruits of crime, or other items illegally possessed” would be found at Mar-a-Lago.

Entirely redacted is a provision explaining why the government believed additional “classified [national defense information]” would be found on the premises.

In a separate filing explaining the rationale behind its redactions, DOJ said it had to protect “a broad range of civilian witnesses,” warning they would likely face intimidation.

The same federal magistrate judge who approved the search ordered DOJ to release the affidavit that convinced him to approve the warrant. Judge Bruce Reinhart concluded Thursday that proposed redactions from DOJ were narrow enough to allow for public disclosure while protecting their ongoing investigation.

The affidavit offers new information about the extent of the saga to recover documents from Mar-a-Lago. The document says the National Archives first reached out about retrieving records as early as May 6, 2021 — just a few months after Trump left office.

Yet it wasn’t until late that year that the Trump team alerted Archives that they had 12 boxes ready for pick up. The agency would instead leave with 15.

The release of the redact affidavit follows the disclosure of the warrant that allowed for the search of Trump’s home, indicating that storing documents there may have violated the Espionage Act, as well as two other statutes.

One bars concealing, removing and mutilating government documents, and the other prohibits similar actions when done “with the intent to impede, obstruct, or influence [an] investigation.”

An inventory released alongside the warrant indicated the FBI recovered 11 different sets of classified documents during the search, along with information about “the president of France” and Trump’s pardon of his ally Roger Stone.

Trump had called for the release of both the warrant and the affidavit. He filed a separate case however seeking an injunction to stall the FBI’s investigation and asking a court to appoint a special master for the case. Doing so would let an outside party approved by the court first review the evidence taken during the search before the FBI can review it.

SCOTUS overturns Roe v. Wade, what does that mean for California?