Fire burning near Big Bear grows to 990 acres, closes in on ski resort 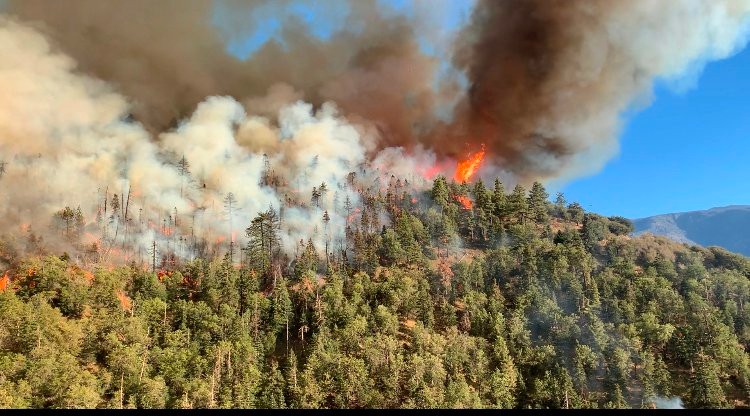 A large wildfire burning in the San Bernardino National Forest near Big Bear continued to grow with very little containment as it made its way toward a local ski resort Wednesday.

The blaze, dubbed the Radford Fire, had burned 990 acres and was just 2% contained as of Wednesday, the U.S. Forest Service stated in an update shortly before 8:30 a.m.

It was first spotted in the Barton Flats area around 1:30 p.m. Monday by a Forest Service helicopter doing lightning reconnaissance.

The fire then burned north onto a slope and was nearing Snow Summit Ski Resort, according to the Forest Service.

Ten crews with 44 engines and eight water tenders are fighting the blaze alongside aircraft.

A total of 471 personnel have been sent to help with the firefight, the Forest Service stated.

Evacuations were first ordered for the areas from Knickerbocker Road west to Castle Rock, and from Pine Knot Road south to the 2N10 road. Areas south of Evergreen Drive and south of Moonridge Road between Summit Boulevard and Club View Drive were later added.

Evacuation warnings are in place from Club View to Angels Camp, from Vine to Lassen; and for Summit Boulevard to McAllister Road to Highway 18 between Fox Farm and Evergreen, the Forest Service stated.

An evacuation center has been opened at Big Bear High School located at 351 Maple Lane.

Those with animals can get assistance by contacting San Bernardino Animal Care and Control at 800-472-5609.

Officials have also closed Highway 38 from Valley of the Falls Drive east to Lake Williams Drive.

Mountain community residents with proof of residency will be allowed through the closure, the Forest Service said.

stop doing this now to save your battery

Will you be taxed for student loan forgiveness in California? It depends