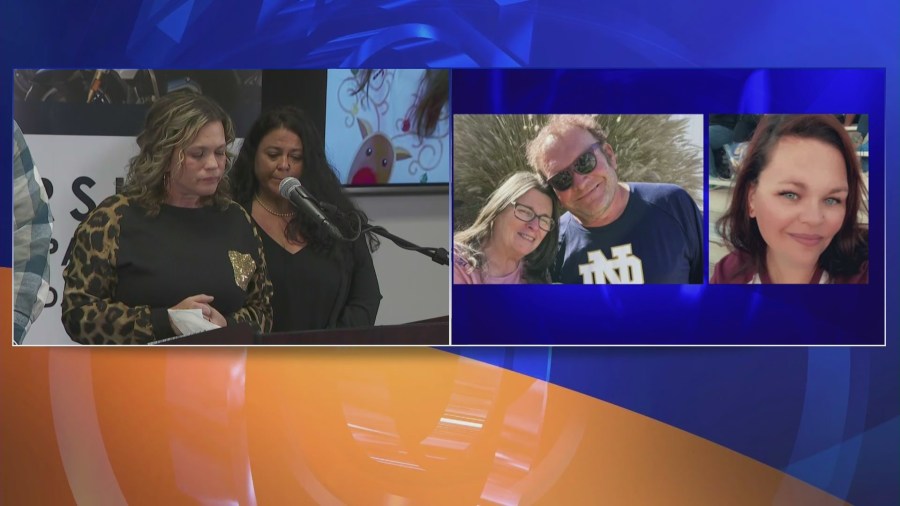 On Wednesday, family members of the three people killed and teen girl kidnapped in Riverside on Friday addressed the public for the first time.

Michelle Blandin, the daughter and sister of the victims, spoke on behalf of the Winek family, who lost 69-year-old Mark Winek, his 65-year-old wife Sharie Winek and their daughter, 38-year-old Brooke Winek.

The Wineks came into contact with the killer, a 28-year-old law enforcement officer named Austin Lee Edwards, 28, who traveled from Virginia to Riverside to abduct Brooke Winek’s 15-year-old daughter, whom he had met online, police said.

According to police, Edwards “catfished” the girl using a fake identity, then kidnapped her in the 11200 block of Price Court, killed her family and set fire to the teen’s home. He later was killed in a gunfight with deputies from the San Bernardino County Sheriff’s Department. The girl was unhurt.

Before Friday, however, he had been an officer of the Virginia State Police, then been hired by Washington County Sheriff’s Office. He passed psychological, written and physical tests, as well as a lie detector exam, as part of his employment.

Blandin lambasted Edwards for being a law enforcement officer while being “an adult that traveled across the country to kidnap a 15-year-old girl.”

“We have some solace that this person will never harm anyone again, especially a minor. … He took an oath to protect, and yet he failed to do so. Instead, he preyed on the most vulnerable,” she said.

“It is shocking and sad to the entire law enforcement community that such an evil and wicked person could infiltrate law enforcement while concealing his true identity as a computer predator and murderer,” Andis said in the release. “Our thoughts and prayers are with the Winek family, their friends, officers, and all of those affected by this heinous crime.”


6 parenting tips to protect children from being ‘catfished’

Blandin also offered a warning to those with teenagers so other families might avoid her fate.

“Parents, please, please know your child’s online activity. Ask questions about what they are doing and whom they are talking to,” said Blandin. “Anyone can say they’re someone else … Catfishing led to the deaths of the three most important people in my life, my dad, my mom and my sister.”

A GoFundMe campaign has been started to help with the funeral expenses of the deceased and provide financial support to the family’s two surviving teenage daughters.

Maverick’ flies back into theaters for limited time

Video: Bus driver appears to nod off before Colorado crash

Lyft is cutting 13% of its employees