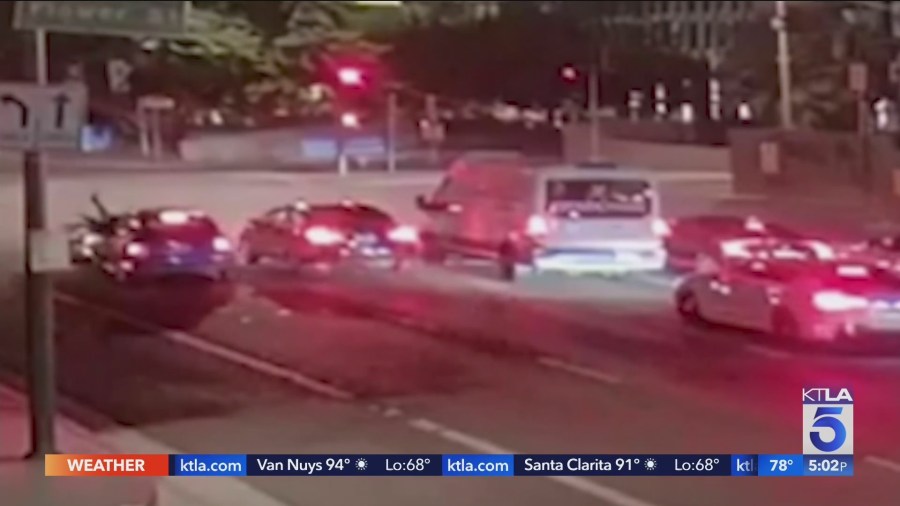 The Los Angeles Police Department is searching for the driver who hit a man on his moped in downtown L.A. and then fled from the scene.

Miguel Velazquez, 20, was stopped at a red light on 3rd Street at Flower Street when the driver of a blue Mini Cooper approached at high speeds and slammed into the back of his moped.

Velazquez was flung into the air and the Mini Cooper took off without stopping to see if he was OK.

Miguel suffered serious injuries, including a broken wrist and tailbone, and was transported to the hospital for treatment.

The driver of the Mini Cooper is described by police as a man in his 40s, possibly Hispanic or Indian, with dark hair. The vehicle has a panoramic sunroof and likely front end damage, police added.

A Toyota Prius was seen in a witness video, following the Mini Cooper and flashing their brights at them in an effort to get them to stop. Police are hoping to also speak with the driver of the Prius in hopes that they may have additional information.

Anyone with information is urged to contact LAPD Central Traffic Detectives at 213-833-3713.

Police are offering a $25,000 reward for information that leads to an arrest.

A GoFundMe page has been set up to help pay for Velazquez’s medical bills.

What is a street takeover?