Dog blinded after ingesting oxycodone while walking in Santa Monica 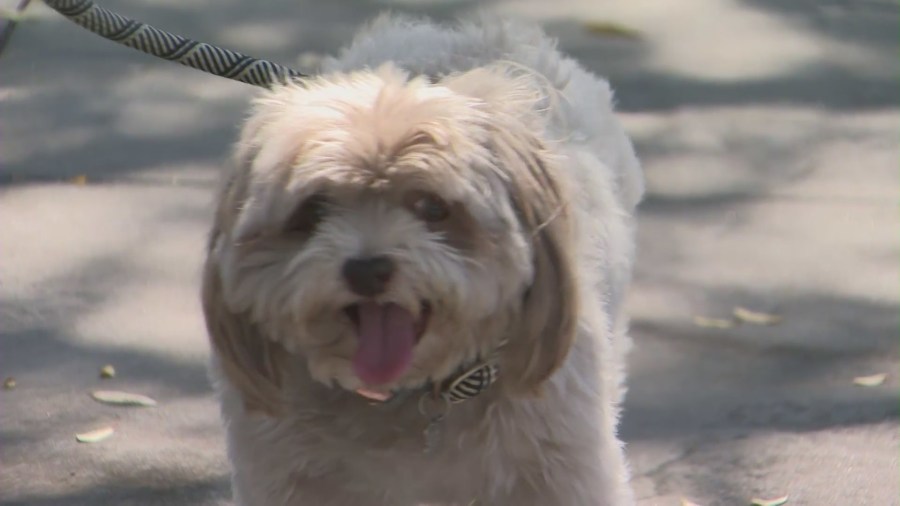 A local dog owner is warning the public after her small dog became permanently blinded after ingesting oxycodone that it apparently found while out on a walk in Santa Monica.

Lori Burns was walking her two dogs last week along Ocean Avenue in Santa Monica. She said tons of people were out and about exercising, playing, and walking their own dogs in the 78-degree weather.

Suddenly one of her dogs, a 15-pound former shelter dog named Chance, started to breathe heavily before collapsing.

Burns carried her dog to the car and immediately drove to a nearby veterinary clinic.

“They said they needed to immediately ice his body and give him oxygen and start an IV and that’s when I looked at the vet and I said, ‘Is he going to live?’ and he said, ‘I really don’t know.’”

The veterinarian told her that Chance had a fever of 106 F and if they couldn’t bring down the temperature, his organs would begin to fail and he would die.

About an hour later after running some tests, the veterinary staff informed Burns that Chance had somehow ingested oxycodone and had overdosed on the opioid.

Now knowing what they were dealing with, the veterinarians were able to treat his symptoms and Chance made an almost miraculous recovery.

Burns was able to pick him up the next day and bring him home, but that’s when she discovered that her dog’s life would be permanently altered: the medical scare had left him blind.

“I was thankful that I could pick him up the next day, bring him home and have him at least start this new chapter of his life, dark and blind,” Burns said. “At least he’s got my family and me to love on him.”

Veterinarians say it’s not entirely unheard of for dogs to mistakenly ingest opioids. Usually, though, dogs will accidentally eat a pill belonging to their owners.

Had Burns not acted quickly and immediately rushed her dog to the veterinary hospital, he likely would’ve died.

Pet owners are urged to take notice of the signs of opioid overdose in dogs. Those signs include collapsing, problems breathing, urinating or drooling, and unstable walking as if they were drunk.

Burns is unsure when or where Chance came in contact with the controlled substance, but she hopes her story helps other dog owners know what the risks and signs of a doggy overdose and brings attention to the condition of some local parks.

As for Chance, the dog was given his name after he was rescued from a shelter and given a new lease at life. Even with his new disability, it seems he’s been given another chance at a happy life.

‘We love you, Cruz’: 17-year-old released from hospital 3 months after deadly crash

SigAlert issued for 110 Fwy in Florence for CHP investigation