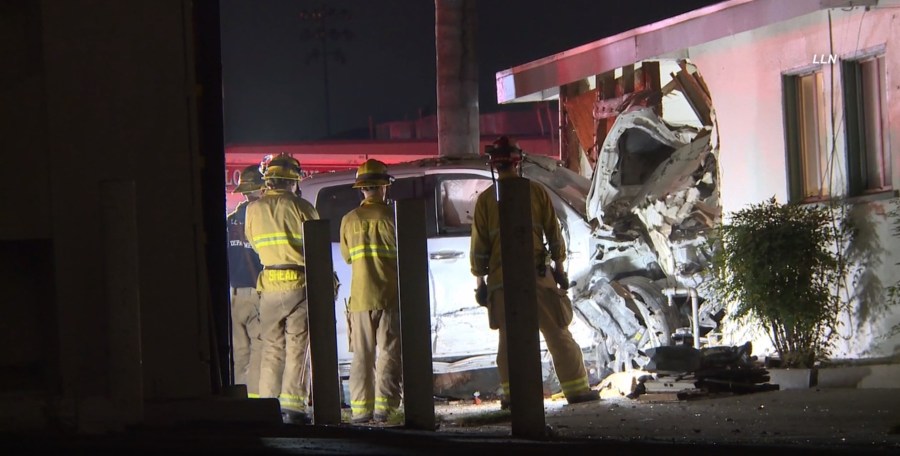 A Long Beach man was arrested after two vehicles engaged in a road-rage-fueled car-to-car gunfight Sunday morning, leading to a woman sustaining multiple gunshot wounds and a pickup truck careening into a house, police said.

Police initially responded to what they thought was just a crash shortly after 2:30 a.m. near East 7th Street and Park Avenue, according to the Long Beach Police Department.

When officers arrived, they found bullet casings and other evidence of a shooting.

A preliminary investigation determined that occupants of two vehicles opened fire on each other after a road-rage incident.

One of the vehicles then struck a white pickup truck, which was then sent careening into the home, police said.

Footage from the scene shows firefighters removing the truck from the house, leaving an enormous gap in the house’s wall.

A refrigerator was also visibly damaged, and firefighters used wooden beams to bolster the home’s ceiling.

Footage also showed what appeared to be a dark gray Dodge sedan being one of the two cars involved in the exchange of gunfire.

Though the people in both cars involved in the shooting fled the scene, a gunshot wound victim was found at a local hospital.

Police determined that the person who was shot, a woman, was in the car that crashed into the pickup truck, as were two others at the hospital.

One of those companions, 48-year-old Jean Claude Lewis of Long Beach, was driving the vehicle and had fired his weapon at the other car, police said, adding that they seized a firearm from him.

Lewis was arrested on one count of carrying a loaded firearm and another count of driving with a suspended license. He is being held in lieu of $60,000.

The other driver, a man, remains outstanding, police said, and the investigation is ongoing.

“It Was Actually Very Peaceful That Way”