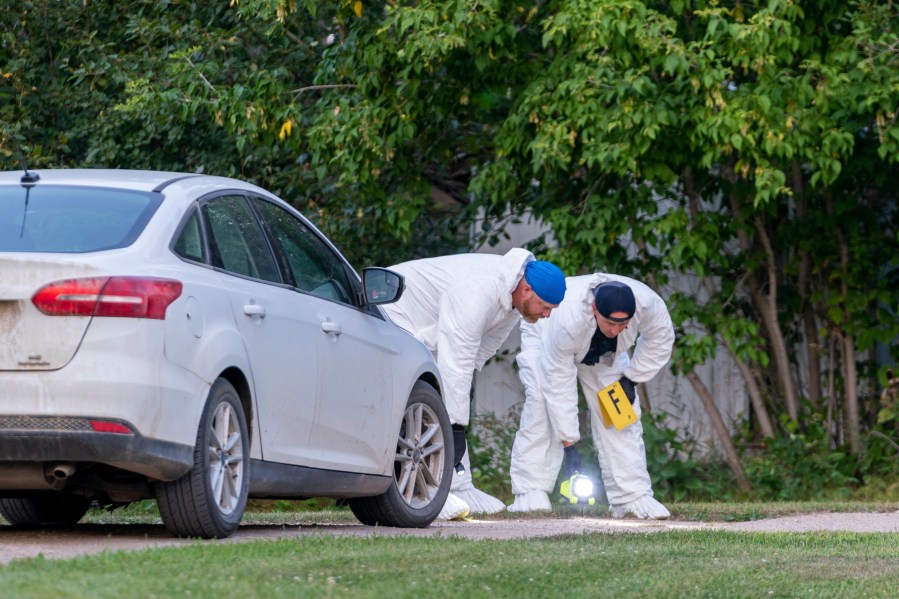 REGINA, Saskatchewan (AP) — Canadian police searched across the expansive province of Saskatchewan for two suspects believed to have stabbed to death 10 people in an Indigenous community and a nearby town in one of the deadliest mass killings in the country’s history.

The suspects also injured 15 people in the series of knife attacks that led the James Smith Cree Nation to declare a state of emergency and badly shook residents of the nearby village of Weldon.

“No one in this town is ever going to sleep again. They’re going to be terrified to open their door,″ said Weldon resident Ruby Works, who was close to one of the victims.

Police, meanwhile, said a vehicle reportedly carrying the two suspects had been spotted in Regina, about 335 kilometers (208 miles) south of the communities where the stabbings occurred.

“If in the Regina area, take precautions & consider sheltering in place. Do not leave a secure location. DO NOT APPROACH suspicious persons. Do not pick up hitch hikers. Report suspicious persons, emergencies or info to 9-1-1. Do not disclose police locations,” the RCMP said in a message on Twitter.

“It is horrific what has occurred in our province today,” said Rhonda Blackmore, the Assistant Commissioner of the RCMP in Saskatchewan, adding there were 13 crime scenes where either deceased or injured people were found.

She couldn’t provide a motive, but the chief of the Federation of Sovereign Indigenous Nations gave a statement suggesting the stabbings could be drug related.

The elected leaders of the three communities that make up the James Smith Cree Nation, including the Chakastaypasin Band and the Peter Chapman Band, declared a local state of emergency and opened up two emergency operations centers.

Chakastaypasin Chief Calvin Sanderson – who is not related to the suspects – said everyone’s been affected by the tragic events.

“They were our relatives, friend,″ Sanderson said of the victims. “It’s pretty horrific.”

“This is the destruction we face when harmful illegal drugs invade our communities, and we demand all authorities to take direction from the Chiefs and Councils and their membership to create safer and healthier communities for our people,” said Chief Bobby Cameron of the Federation of Sovereign Indigenous Nations.

Among the 10 victims killed was Lana Head, who is the former partner of Michael Brett Burns, and the mother of their two daughters.

Burns told the Aboriginal Peoples Television Network that “It’s sick how jail time, drugs and alcohol can destroy many lives,” he said. “I’m hurt for all this loss.”

Last May, Saskatchewan Crime Stoppers issued a wanted list that included Myles Sanderson, writing that he was “unlawfully at large.”

It is among the deadliest mass killings in Canadian history. The deadliest gun rampage in Canadian history happened in 2020 when a man disguised as a police officer shot people in their homes and set fires across the province of Nova Scotia, killing 22 people. A man used a van to kill 10 pedestrians in Toronto in 2019. But mass killings are less common in Canada than in the United States.

Deadly mass stabbings are more rare than mass shootings but have happened around the world. In 2014, 29 people were slashed and stabbed to death at a train station in China’s southwestern city of Kunming. In 2016, a mass stabbing at a facility for the mentally disabled in Sagamihara, Japan, left 19 people dead. A year later, three men killed eight people in a vehicle and stabbing attack at London Bridge.

Doreen Lees, an 89-year grandmother from Weldon, said she and her daughter thought they saw one of the suspects when a car came barreling down her street early in the morning Sunday as her daughter was having coffee on her deck. Lees said a man approached them and said he was hurt and needed help.

But Lees said the man took off and ran after her daughter said she would call for help.

“He wouldn’t show his face. He had a big jacket over his face. We asked his name and he kind of mumbled his name twice and we still couldn’t get it,” she said. “He said his face was injured so bad he couldn’t show it.”

She said the man was by himself and “kind of a little wobbly.”

“I followed him a little ways to see if he was going to be OK. My daughter said ‘Don’t follow him, get back here.’”

Weldon residents have identified one of the victims as Wes Petterson. Ruby Works said the 77-year-old widower was like an uncle to her.

“I collapsed and hit the ground. I’ve known him since I was just a little girl,″ she said, describing the moment she heard the news. She said he loved his cats, was proud of his homemade Saskatoon berry jam and frequently helped out his neighbors.

“He didn’t do anything. He didn’t deserve this. He was a good, kind hearted man,″ said Works.

Weldon resident Robert Rush also described the victim as a gentle, widowed man in his 70s.

Rush said Petterson’s adult grandson was in the basement at the time and phoned police.

At the Weldon Christian Tabernacle Church the congregation began their regular Sunday service by saying a special prayer to the victims and their families.

At the James Smith Cree Nation, a convenience store that also serves as a gas station became a gathering place for community members, who greeted each other with tears and hugs.

A sign on the door said: “Due to safety concerns with our community we will remain closed until further notice.”

The search for suspects was carried out as fans descended on Regina for a sold out annual Labor Day game between the Canadian Football League’s Saskatchewan Roughriders and Winnipeg Blue Bombers.

The Regina Police Service said in a news release that with the help of Mounties, it was working on several fronts to locate and arrest the suspects and had “deployed additional resources for public safety throughout the city, including the football game at Mosaic Stadium.″

The alert first issued by Melfort, Saskatchewan RCMP about 7 a.m. was extended hours later to cover Manitoba and Alberta, as the two suspects remained at large.

The Saskatchewan Health Authority said multiple patients were being treated at several sites.

“A call for additional staff was issued to respond to the influx of casualties,” authority spokeswoman Anne Linemann said in an email.

Canadian Prime Minister Justin Trudeau said in a statement he was “shocked and devastated by the horrific attacks.”

“As Canadians, we mourn with everyone affected by this tragic violence, and with the people of Saskatchewan,” Trudeau said.