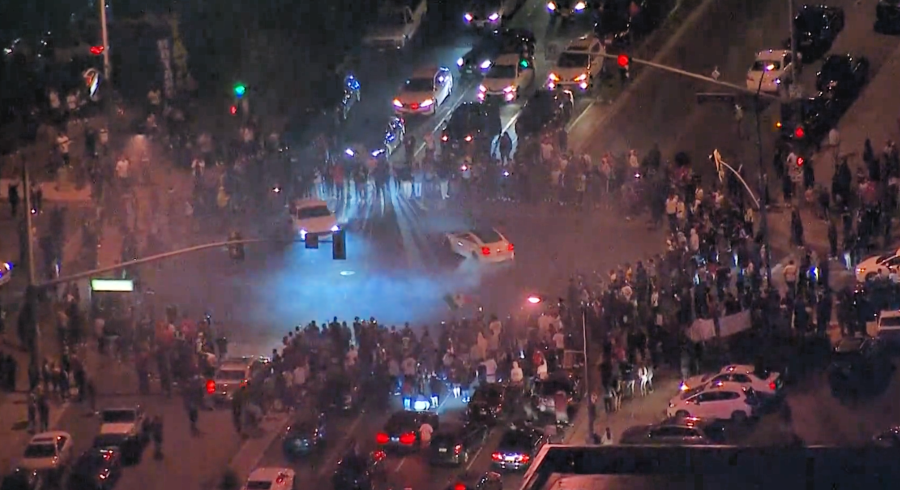 The California Highway Patrol has a dedicated unit whose sole mission is to stomp out the growing problem of dangerous street takeovers and sideshows on California streets.

The CHP Southern Division Street Racing Enforcement Unit is comprised of specially trained officers and full-time investigators who respond to street takeovers and train other law enforcement agencies on how best to respond to them.

One of the most effective weapons in their arsenal is the ability to impound vehicles that are found to be involved with the sideshows and put the lives of others at risk.

“One method that is utilized by a lot of agencies that we’ve taught is, we can go with an affidavit to a judge to demonstrate how this vehicle is an instrument of the crime in a reckless act, such as street racing or sideshows or drag races or any other aspect of reckless driving that blatantly endangers lives, and we can seek a 30-day impoundment or seizure of that vehicle,” said Lt. Joe Zagorski, operations and administrative manager of the task force.

Zagorski says the vehicle can only be held for that 30 days, at which point the owner can pay the fees (usually around $2,000) to have the vehicle released. If the owner isn’t able to pay those fines, the impound lot or tow yard can take possession of the vehicle and auction it off to recoup any costs of holding it.

But aside from that, is there any way that a vehicle used in sideshows can be taken away for good?

“To go and seize someone’s vehicle permanently, there is a legal process we have to go through because it’s a seizure of their property. So constitutionally, we have to demonstrate in court how this vehicle was such a nuisance and endangering public health and safety, that it can’t be permitted to go back because it’s going to be used again,” he said.

It has happened on occasion, but it depends greatly on where the crimes were committed.

The city of Paramount has a city ordinance that allows for asset forfeiture of vehicles used in street racing and the task force has been successful in helping the city seize problem vehicles.

Elsewhere though, it’s a different story.

In Los Angeles County, there’s a section in the vehicle code that allows for “nuisance” vehicles to be taken from their owners, but Zagorski said it’s a bit outdated and doesn’t include language regarding street takeovers.

“It hasn’t been updated for sideshows, but it can be made applicable,” he says. That process would probably have to begin with elected leaders at the county level.

Vehicles can also be impounded if drivers are arrested and convicted of violating the vehicle code, but because most of those offenses are misdemeanors, that doesn’t happen often. Los Angeles County District Attorney George Gascón’s office currently utilizes a diversion program for many misdemeanor violations, meaning offenders can often attend classes or perform community service to have those charges dropped.

With various counties, cities and municipalities having their own unique ordinances, laws and prosecutors, Zagorski says the best use of his resources is to train local agencies and encourage the same standard operating procedure to combat the problem.

“We’re sharing our practices that we’ve been doing for three, four years, with every agency with every municipality, every city. And that also even helps in a lot of areas because most incorporated cities prosecute their own misdemeanors,” Zagorski said. “So by utilizing and partnering with all these various municipalities in creating ordinances, and local laws, and other punishments and penalties, that is what we’re finding is actually working.”

There is some help on the way for law enforcement officers across the state who are tasked with stopping the street takeovers.

Last year, Gov. Gavin Newsom signed a bill into law that allows courts to temporarily suspend the driver’s licenses of people convicted of engaging in street racing on highways, although that law doesn’t go into effect until 2025. Some cities are looking to prosecute people who use social media to organize the events and other municipalities have explored arresting spectators, who Zagorski says are the biggest obstacle in busting up the takeovers and make it unsafe for officers to apprehend those involved.

And as these wild nighttime spectacles continue to evolve, CHP says it’s best for people to just stay away entirely. The inherent danger and the risk of hefty fines just aren’t worth it.

So while it’s likely that people who have their vehicles taken away will eventually get them back, law enforcement and California lawmakers are ramping up other efforts to snuff out the problem.

With hundreds of officers trained across the state, and even more arrests made and vehicles seized, Zagorski hopes it’s just a matter of time.

In the meantime, if you find yourself in the middle of a street takeover, CHP encourages you to calmly get away from the area and call 911.

Monkeypox virus could become entrenched as new STD in U.S.