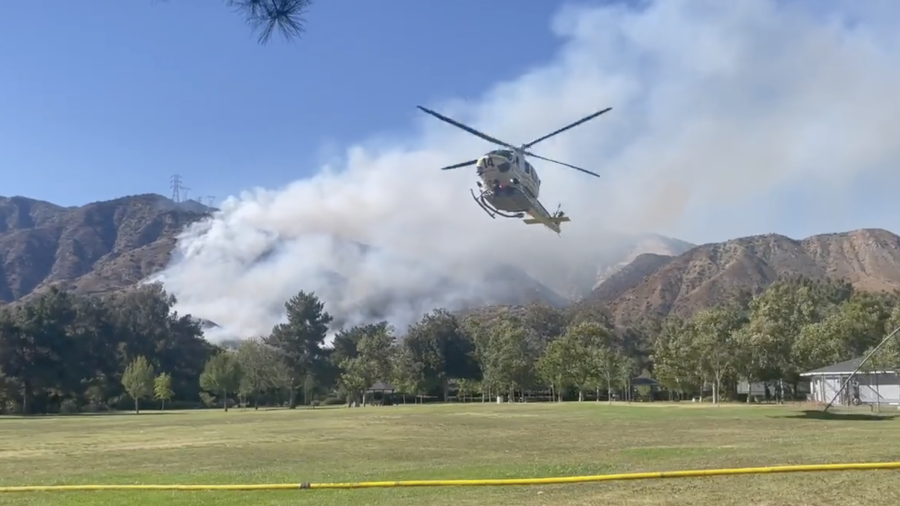 Firefighters responded to the hills above Duarte Sunday evening after a pair of fires broke out around 4:15 p.m.

The two fires were dubbed the Fish Canyon/Riverbed Fire and the Opal Canyon Fire, according to the city of Duarte, though they were later consolidated into one blaze, the Fish Fire, by the Los Angeles County Fire Department.

Large plumes of smoke were visible from the canyons and hills above the town as dozens of fire personnel responded to battle the flames.

The fires sparked near the intersection of Mel Canyon Road and Royal Oaks Drive near Glen Miller Park, according to the L.A. County Fire Department.


Evacuations ordered due to Sheep Fire burning in Wrightwood

Multiple air tankers were called to provide air support to crews battling the fire on the ground. County fire helicopters were also seen by KTLA news crews on the ground.

As of 5:30 p.m., the portion of the blaze once known as the Fish Canyon/Riverbed Fire burned about five acres and forward progress was stopped, and much of it was extinguished by about 6:15 p.m.

The portion once called the Opal Canyon Fire had burned about 20 to 25 acres and was being driven away from homes by moderate wind. By 6:15 p.m., the blaze was active on its north side, away from homes.

“Resources (personnel, trucks, aircraft) will be on scene all night and tomorrow,” the city said, adding that “Mel Canyon area and streets around Encanto Park will remain closed until 10 PM,” though Encanto Drive was open as of 8:50 p.m.

No evacuation orders have been issued at this time.

Idaho Police Arrests 31 Members Of The White Supremacy Group, Patriot Front, For Planning To Riot At A Pride Event

L.A. City Hall to be lit up in honor of Vin Scully