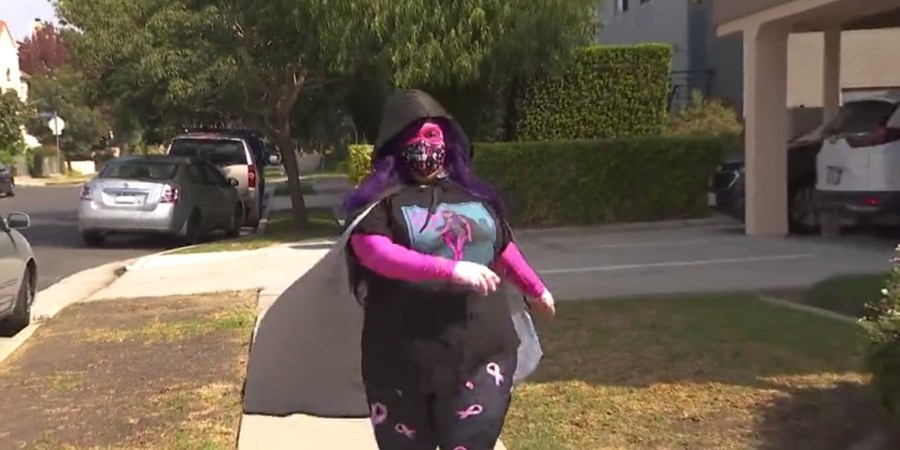 Of all the characters on the streets of Hollywood, she might be the most colorful.

Alice Mitchell dons a pink superhero outfit when she turns into Survivor Girl.

“When I put on that costume, I become her. I become strong and bold and brave, and I can overcome anything,” she said.

That includes breast cancer, a diagnosis she received at age 37.

“It’s the most frightening thing that you’ll ever hear in your life,” she said. “I remember at that very moment, that it hit me what she was saying, that I had cancer.”

Mitchell said she had accepted that “this likely was going to be the end of me,” but after dark days, chemotherapy, radiation and surgery, what she thought was her end became her beginning.

“I kept writing to myself that if I lived, that I would never let anything hold me back anymore, that I would pursue all of my dreams,” she said.

Something strange happens to some people who are told they might die soon: Many of them really start living.

At age 38, Mitchell was accepted to the University of Tennessee, and after graduation, she moved to L.A. to work for NFL Network and then Yahoo Sports.

“Dream job absolutely. Just getting to be around sports, basketball, NBA Finals and the Super Bowl,” she said.

Eleven years past her diagnosis, Alice is now cancer-free and attends events to support others.

This year, she’ll return to the American Cancer Society’s Making Strides Against Breast Cancer Walk on Oct. 22 to spread joy and hope like the superhero she is.

“I know there are other warriors out there that need that, that need to be reminded that you’re not alone in this fight,” she said. “And, together, we will get through this.”

Biden acknowledges his age is a ‘legitimate’ voter concern