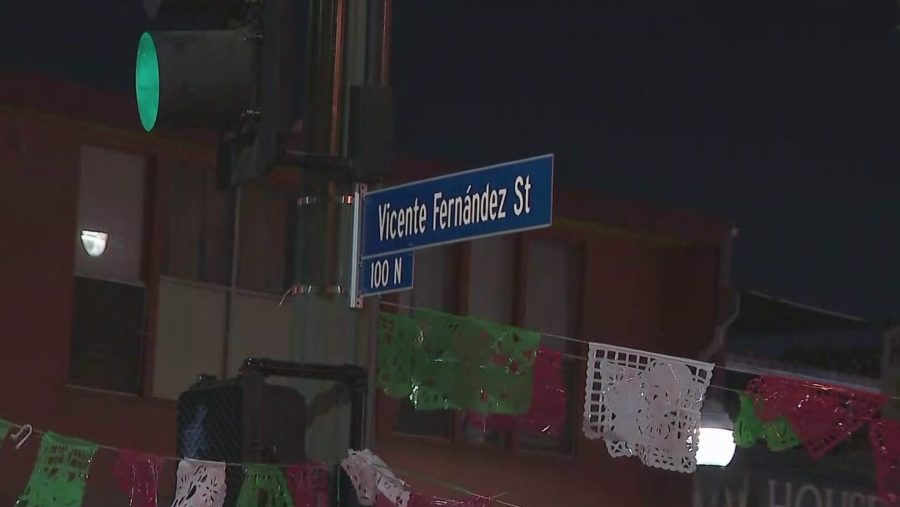 Mexican pageantry and pride were on full display at Mariachi Plaza Friday to honor an iconic Mexican singer on Mexican Independence Day.

Hundreds gathered to remember the life of Vicente Fernández, an icon of Mexican music and culture.

“We’re here because of our heritage. I want to teach my grandkids about our Mexican background, our music. All of that is forgotten, as a grandpa I have to bring them over here,” said Eduardo Jimenez of Monrovia.

Jimenez was one of many who came to pay tribute to Fernandez and watch as a street adjacent to Mariachi Plaza was renamed in honor of the king of Ranchera music.

“Growing up, that’s all we ever heard in our homes, being Mexican. That’s all they played at our house. And to me, it’s family, it’s everything,” Jimenez said. “Who hasn’t gotten drunk to a Vicente Fernández song? It makes you feel alive.”

For Latinos in Los Angeles and around the world, Fernandez is not only a music legend, but a cultural icon.

Throughout his impressive career, “Chente” received many accolades, including three Grammy awards, nine Latin Grammys and a star on the Hollywood Walk of Fame.

“For a lot of folks who really don’t know who Vicente Fernández was, I would say, think about Frank Sinatra, what he meant to all Americans. This is VF, he crosses so many borders,” said Los Angeles City Councilman Kevin De Leon.

Fans and family of Chente where on hand for the ceremony including his widow Cuquita.

Vicente Fernández Jr., the singer’s grandson, was there to soak it all in.

“We’re very appreciative of being here altogether, receiving this award for my grandfather,” he said. “It’s a great honor, a great honor. I get emotional about it.”

And as the sun set on Friday’s ceremony, fans and family members alike joined in song as his many iconic hits were played.

He wanted to create a drought-resistant yard. His HOA said no

Why do gas stations on opposite sides of the same street have different prices?