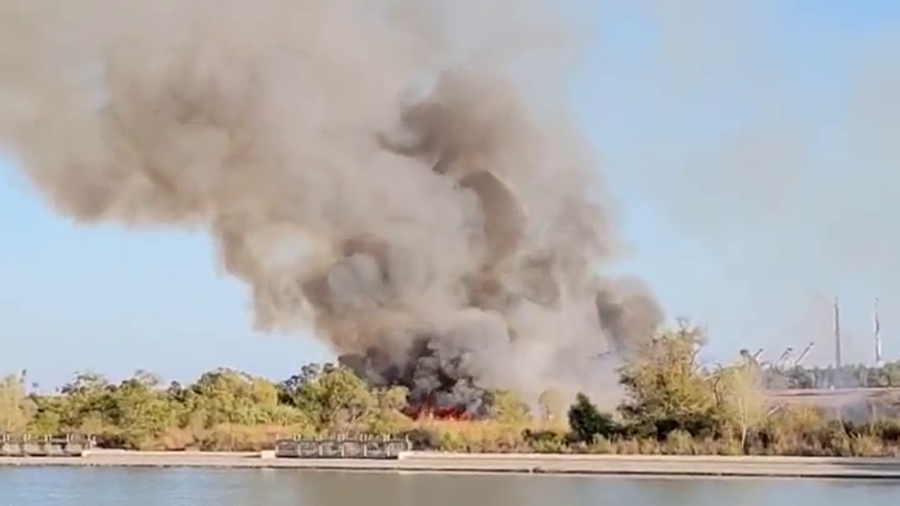 The first fire was reported around 3:40 p.m. at 1149 East Anaheim Street in Long Beach. The Long Beach Fire Department said the smoke was coming from a 2nd-alarm structure fire.

Massive plumes of black smoke could be seen throughout the area Saturday afternoon.

It’s unclear if there were any injuries related to that structure fire, although the Fire Department asked people to stay away from the area while they work to save “life and property.”

About 90 minutes later, a grass fire was reported at a park in Wilmington at 1198 West Anaheim St.

The fire was burning in Harbor Park and produced massive amounts of dark smoke as it burned through marsh reeds, which fire officials said creates a large amount of smoke when it burns.

Multiple fire engines were called to the area to assist with the fire fight, as crews worked to put out the hard-to-reach fire. Firefighters had extra difficulty putting out the blaze due to a lack of fire hydrant access at the park, which led to the need for tanker trucks to haul water to the scene.

The fire had burned more than five acres with light wind in the area before it was contained. It took 70 firefighters more than two and a half hours to put the fire out.

Helicopters and grounds crews were expected to remain on scene throughout the evening to put out any hot spots.