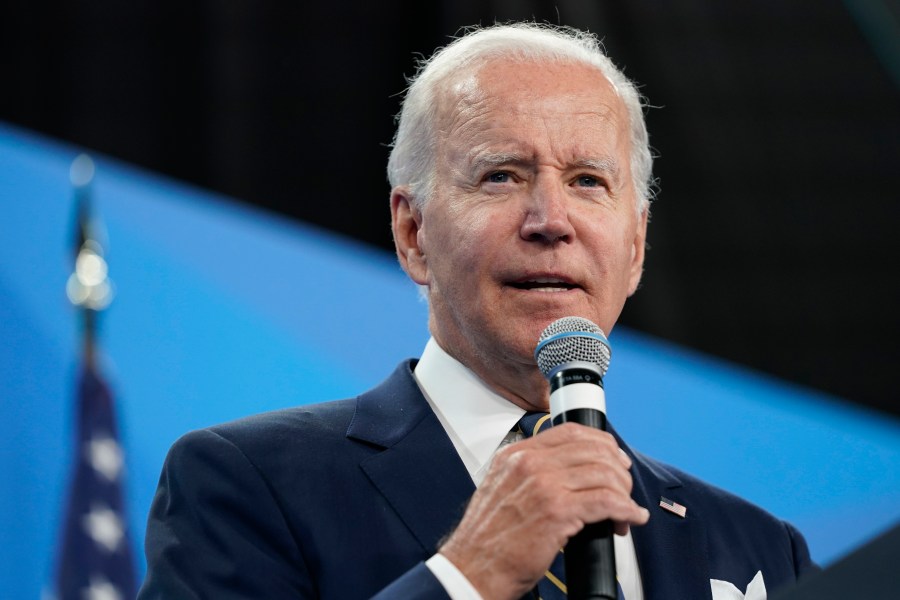 WASHINGTON (AP) — President Joe Biden said Thursday that he would support an exception to the Senate filibuster to protect abortion access, a shift that comes as Democrats coalesce around an election-year message intended to rally voters who are outraged or deflated by the Supreme Court decision overturning Roe v. Wade.

Although Democrats already control the Senate by the narrowest of margins, there isn’t enough support within their caucus to change the filibuster rule, which allows any member to block legislation unless it receives 60 votes. But Biden’s statement was the latest indication that, if the party picks up a few more seats in the midterm elections in November, Democrats could seize the opportunity to pass legislation creating a nationwide right to abortion.

“If the filibuster gets in the way, it’s like voting rights,” Biden said, referencing the rare other issue where he supports sidestepping the rule. Speaking during a news conference in Madrid, where he was attending a NATO summit, the Democratic president said there should be an “exception to the filibuster for this action to deal with the Supreme Court decision.”

Democrats hold 50 seats in the 100-person Senate, with Vice President Kamala Harris able to break ties when she presides over the Senate. It would take 51 votes to change the filibuster rule.

But at least two Democratic senators, Joe Manchin of West Virginia and Kyrsten Sinema of Arizona, don’t support changing the filibuster rule. They also blocked an effort to protect voting rights earlier this year, dealing a defeat to Biden and Democrats who said the legislation was vital to protecting democracy.

Harris said earlier this week that “the votes don’t exist” for changing the filibuster now.

“Why are we talking about hypotheticals?” she told NPR.

Sen. Dick Durbin, D-Ill., who was also attending the NATO summit in Madrid, said Thursday that it’s not practical to expect “massive institutional change” because of opposition to filibuster changes within the caucus.

“This is not the political environment to be looking for that,” he said.

With Biden unpopular and inflation continuing to rise, Republicans are poised to make gains in the November elections and perhaps retake control of Congress. Democrats have been grasping for a message that would change the course of the election, and they’ve increasingly emphasized to voters that they need at least two more seats in the Senate to make progress on key issues.

During a Los Angeles fundraiser last month, Biden said “we need two more senators” because some members of the caucus are “slowing up what we’re able to do.”

Now the Supreme Court ruling on abortion has increased that pressure. Sen. Elizabeth Warren of Massachusetts, a leading progressive voice in the party, recently pointed to races in Pennsylvania and Wisconsin as the best options for Democrats to flip Republican-held seats.

“We get two more senators on the Democratic side, two senators who are willing to protect access to abortion and get rid of the filibuster so that we can pass it,” she told ABC News this weekend. “And, yes, John Fetterman, I’m looking at you in Pennsylvania. Mandela Barnes, I’m looking at you in Wisconsin. We bring them in, then we’ve got the votes, and we can protect every woman, no matter where she lives.”

House Speaker Nancy Pelosi, D-Calif., endorsed a similar step in a letter to colleagues on Monday.

“It is essential that we protect and expand our pro-choice majorities in the House and Senate in November so that we can eliminate the filibuster so that we can restore women’s fundamental rights — and freedom for every American,” she wrote.

The president has been under pressure to take as much executive action as possible to protect abortion rights, although his options are limited. Biden said he’s meeting Friday with governors to talk about abortion and “I’ll have announcements to make then.”

During Thursday’s news conference, Biden harshly criticized the Supreme Court’s decision on abortion and reiterated his warnings that other constitutional protections could be at risk.

“One thing that has been destabilizing is the outrageous behavior of the Supreme Court of the United States in overruling not only Roe v. Wade but essentially challenging the right to privacy,” he said.

Senate Minority Leader Mitch McConnell, R-Ky., said Biden’s comments were “below the dignity of the president,” and that the “attacks on the court are unmerited and dangerous.”

“He’s upset that the court said the people, through their elected representatives, will have a say on abortion policy,” McConnell said in a statement. “That does not destabilize democracy — it affirms it. By contrast, it is behavior like the president’s that undermines equal justice and the rule of law.”

Inmate attempts to escape during transport in Los Angeles County