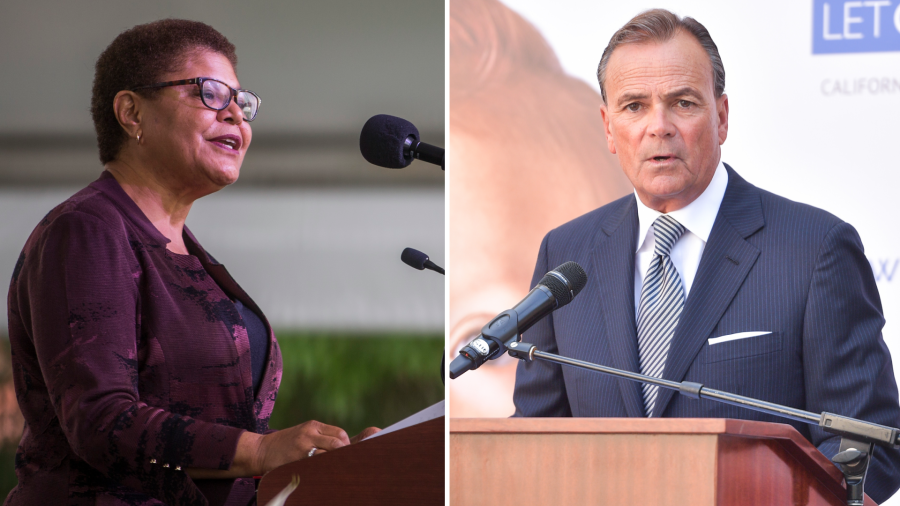 One day after a contentious debate, Los Angeles mayoral candidates Rick Caruso and U.S. Rep. Karen Bass were back on the campaign trail.

“I wake up every morning energized. I just love meeting different people in different communities,” said Caruso, a developer.

On Olvera Street, Caruso also reflected on the debate with Bass, whom he accused of lying about the details of a scholarship she received from USC.

Caruso claims Bass lobbied for legislation on behalf of the school after receiving a scholarship worth nearly $100,000. Bass denies any wrongdoing.

“Hopefully she’s ashamed of herself for lying … We don’t need somebody in office that lies and is in middle of a corruption case. We’ve had that for the last few years and looked what’s happened, crime has gone up and homelessness has gone up,” he said.

Bass, meanwhile, picked up an endorsement from famed attorney Gloria Allred and hammered Caruso on another USC-related issue, this one related to the numerous women who were sexually assaulted by university doctor on campus.

“The victims asked for the report to be made public. He should not have been the one to decide on their behalf what they needed,” she said.

“I will never waver in my commitment to protecting the right of women to control our own destinies,” she said.

The Nov. 8 election is less than two months away, and both candidates are zeroing in on homelessness, crime and housing affordability.

Caruso believes Angelenos are frustrated and they want change.

“There’s a lot of apathy out there … People, I hope, realize that through their vote, their voice is heard. Let’s take back the city and clean it up, I’m ready to go,” he said.

The California ZIP codes with the cheapest home prices