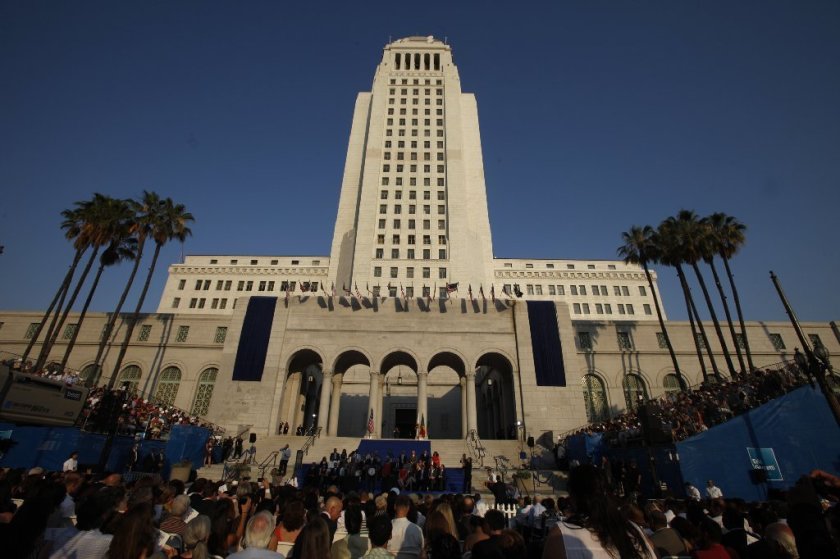 Just 44 days remain until voters decide who will become the next mayor of Los Angeles, and U.S. Rep. Karen Bass and developer Rick Caruso are ramping up their campaigns.

The two are competing to replace current Mayor Eric Garcetti, who has termed out.

Both attended the Los Angeles Korean Festival on Saturday, and Caruso also met with voters at a Veterans of Foreign Wars post in Sun Valley, where he explained his plans to combat crime and homelessness.

“I want to declare a state of emergency day one of being mayor. Thirty thousand shelter beds being built, 500 case workers to go on the street,” he said.

Speaking with KTLA, Bass agreed that sidewalks need to be cleaned up, though she argued that “shelters are not the answer.”

Caruso again attacked Bass about the scholarship she received from the University of Southern California, claiming she lobbied for legislation to benefit the university in exchange for her master’s degree.

Bass’s scholarship has been mentioned in a federal probe of suspended Los Angeles City Councilman Mark Ridley-Thomas, who also is under scrutiny in connection with USC.

Bass retorted that the developer “knows better than that.”

“As the former chair of the Board of Trustees, he’s trying to make it looks as though I’m involved in a case that I have nothing to do with. Federal Investigators have said I am not being investigated, I’m not part of the case,” she said.

Bass is leading Caruso in recent polling, prompting him to spend tens of millions of dollars in advertising in an attempt to attract undecided voters.

“I get criticized on spending a lot of money on this race. Yes I am, no doubt about it,” he said. “Why am I doing that? Because I want to get my message out. I don’t want to take a lobbyist’s money.”

Bass took issue with Caruso’s spending and said she expects the already contentious race “to get nastier on his part because again, he is trying to catch up to me.”

“Just think about it,” she said. “He has spent $67 million on a race. I have spent $4 (million). Do you know how many people could be housed for $67 million? I think the spending is shameful.“