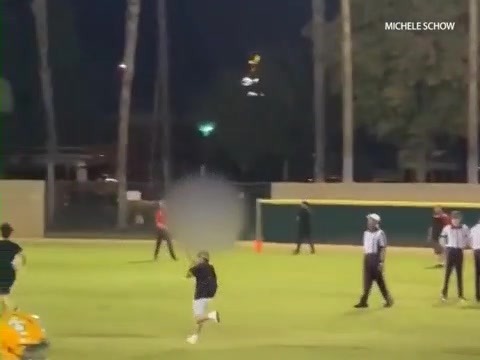 The person seen racing across the field at last Friday’s Anaheim Katella versus La Palma Kennedy High School football game carrying a flag that read, “I eat a**” has been identified only as a 20-year-old man and not a teenager, according to a report by the Los Angeles Times.

In video that went viral, the man can be seen running down the field in Glover Stadium with the flag and nearly escaping over a concrete wall.

Before he was able to get away, a Katella school employee grabbed him and body-slammed him to the ground.

It is unclear whether the Katella employee is a coach at the school.

Michele Schow, who shared the video with KTLA and witnessed the event, said the force of the body slam knocked the 20-year-old out.

Officials with the Anaheim Union High School District and police told the Times that the 20-year-old is not a student and not affiliated with either of the schools.

An Anaheim Union spokesperson, John Bautista, told the Times that school officials learned the man has been involved in similar stunts at other schools “for social media purposes.”

The 20-year-old was cited by police for trespassing.

Bautista did not say whether the school employee would be disciplined for body slamming the man.

“We take these incidents very seriously, and while this is a confidential matter, the incident is under investigation,” he told the Times.

6.0 magnitude earthquake strikes off the coast of California