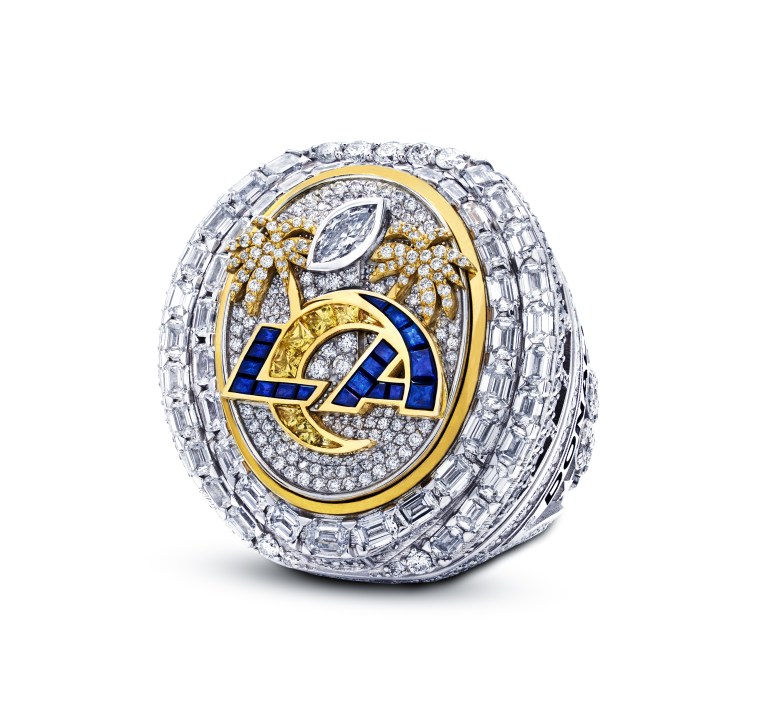 How do you celebrate winning a Super Bowl in your home stadium, the most expensive stadium in the world?

With a championship ring that uses more diamond weight than any ring before it to help recreate a miniature SoFi Stadium on your finger, of course.

The Los Angeles Rams’ Super Bowl LVI ring, designed by high-end jeweler Jason of Beverly Hills, features actual pieces of the game ball and field in addition to a record-setting amount of precious stones and a twist-off top that reveals a small-scale SoFi Stadium.

“The underside of the removable top features a view of SoFi Stadium’s translucent ETFE roof surrounded by a piece of a Super Bowl LVI game ball. The field in the stadium is made up of a trademark green material that consists of remnants of the actual turf that the 2020 and 2021 seasons, including Super Bowl LVI, were played on,” the Rams said in a press release.

“Most people don’t understand how immersed we become in the design process,” added Jason Arasheben, CEO of Jason of Beverly Hills, in the press release. “We are passionate about understanding the team, the season, and the city. We spent an entire day at SoFi Stadium. The first thing I said was, ‘What can you get me from the game? The field? Ball? What else?’ I didn’t just want it to be historical in design, but have physical elements from the event as well. It all adds value and authenticity, creating a one-of-a-kind piece of memorabilia.”

The ring is also full of symbolism, from the 20 carats of diamonds — celebrating the stadium’s opening in 2020 — to the two stars that mark the franchise’s two championships and L.A. being known as a city of stars.

“We are grateful to Jason and his team for their creativity and passion to deliver a championship ring that reflects our team and their historic season, the one-of-a-kind stadium where it happened, and the city that inspired all of it,” said Los Angeles Rams Vice President of Football & Business Affairs Tony Pastoors.

The team celebrated their championship with a ring ceremony Thursday, and the Rams posted videos of stars like Aaron Donald showing off their new jewelry.

“Ring me! Ring me,” Donald crowed.

For a full rundown of the ring’s hidden gems, visit the Rams website.

Fans will be able to purchase replica rings. For more information, sign up here.

Bed Bath & Beyond to close 150 stores, cut jobs in bid to rebuild business