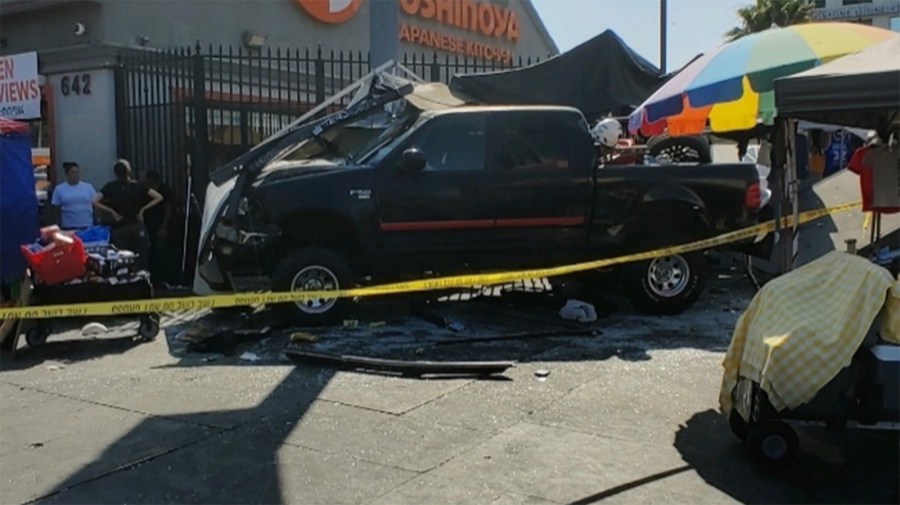 An investigation is underway after a pickup truck hopped a curb and struck several pedestrians in Westlake Saturday morning.

It happened around 9:10 a.m. on the 600 block of South Alvarado Street, according to the Los Angeles Fire Department.

The driver of Ford F-150 told Los Angeles police that he was driving on Wilshire Boulevard when he saw what he believed was a man pointing a gun at him. The man said he swerved to avoid the supposed gunman and lost control of his vehicle, which jumped a curb onto a sidewalk and hit multiple street vendors and pedestrians.

In total, nine people were struck by the careening vehicle, including two 8-year-old children, police said.

Six of the people hit were hospitalized, including one adult with serious injuries, but all are expected to survive. Three others declined transportation to the hospital, LAFD officials said.

The bizarre circumstances leading up to the crash are currently under investigation by the Los Angeles Police Department.

Anyone with information about the crash can contact the Los Angeles Police Department traffic Detective Juan Campos at 213-833-3713. You can also submit an anonymous tip online at lacrimestoppers.org.