7-Eleven in Arcadia robbed at gunpoint 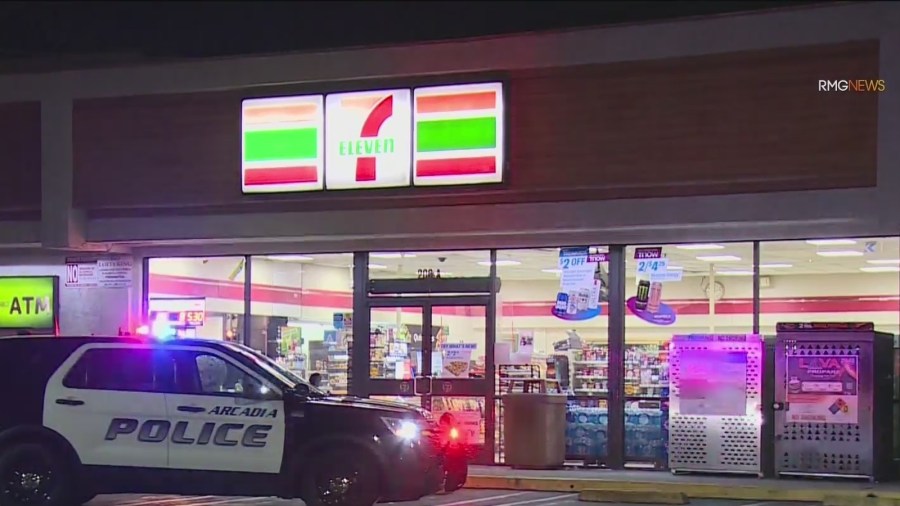 A 7-Eleven store in Arcadia was robbed at gunpoint late Saturday night, just days after a violent armed robbery spree took place at some of the convenience store’s other locations across the Southland.

Just before midnight Saturday, Arcadia police responded to the store on the 200 block of E. Live Oak Avenue for a report of an armed robbery that had just happened.

An employee told police that an armed man walked into the store and demanded money. The suspect then fled in a dark colored sedan after the employee gave them an undisclosed amount of cash from the register.

The robber was described as a man with a small build who is about 5 feet 6 inches tall. He was last seen wearing a green camouflage jacket, a green baseball cap, dark jeans, black gloves, a blue medical face mask and white shoes.

Police said his vehicle fled eastbound from the scene.

The case is currently under investigation and anyone with information is urged to contact the Arcadia Police Department at 626-574-5151.

This latest 7-Eleven robbery comes two days after a pair of men were arrested for their alleged roles in a string of burglaries at a number of the convenience store’s franchises across Southern California. In that violent crime spree, two people were killed and several others were shot in at least six armed robberies.

The men, identified as 20-year-old Malike Patt and 44-year-old Jason Payne of Los Angeles, have also been linked other crimes in the area, including at least another murder.

The “reign of terror,” as described by Orange County District Attorney Todd Spitzer, led to 7-Eleven corporate executives encouraging stores to close Monday night while the suspects remained on the loose. The company also offered a $100,000 reward for information that could help police make an arrest.

Investigators said the Arcadia robbery does not appear at all related to this past week’s crimes, sharing that the suspect and modus operandi differ from the earlier robberies and that the only common factor was the locale.

Anonymous tips about any of these convenience store robberies can be submitted online at lacrimestoppers.org.

Jennifer Lopez and Ben Affleck Gets Married in Las Vegas

Ohio Mother ‘Internally Decapitated’ By The Father Of Her Children

stop doing this now to save your battery

LAUSD to make naloxone available at all K-12 schools