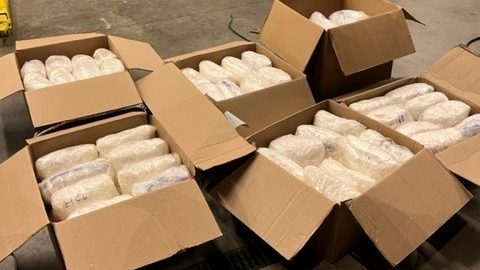 A California High Patrol canine officer was involved in making one of the largest methamphetamine busts in state history last week, authorities announced on Monday.

On the morning of Tuesday, August 16, a CHP officer stopped a 2017 Land Rover on State Route 99 in Bakersfield for a “vehicle code violation,” CHP said in a news release.

“After noticing indicators of criminal activity, the officer deployed his canine, which alerted to the odor of narcotics.”

Officers searched the vehicle and found cardboard boxes packed with 500 pounds of crystal meth, according to CHP.

Two occupants of the vehicle, both from Fresno, were arrested and booked into the Kern County Jail on charges of possessing a controlled substance for sale and selling or transporting methamphetamine.

“Illegal narcotics have a devastating effect on our communities,” CHP Central Division Chief Ceto Ortiz said in a statement.  “I would like to thank our Central Division Canine Unit for its continued commitment and dedication to removing dangerous narcotics from our roadways.”

That same day, two traffic stops by CHP canine officers resulted in the combined seizure of 150 pounds of drugs, 92 pounds of cocaine and 66 pounds of methamphetamine, CHP said.