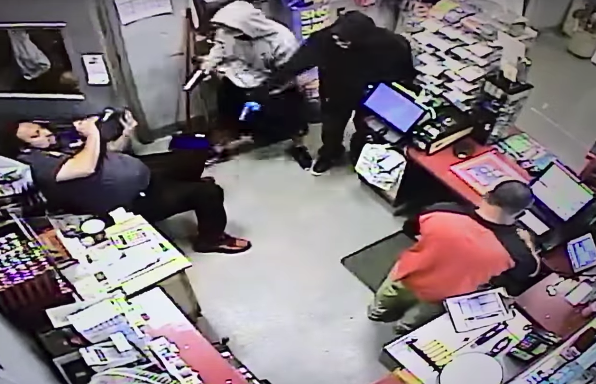 Two men are being sought in an armed robbery of a gas station store in Culver City that occurred over the weekend, police said Monday.

The incident was reported about 9:35 p.m. Saturday at a Shell gas station located at 10332 Culver Blvd.

Responding officers found three victims and learned two men entered the store and one pointed a silver and black semi-automatic handgun at one of the victims, according to Culver City police.

The men then forced two employees face down on the floor and removed cash from the register, video released by police on Monday showed.

One of the men entered the back office, allegedly pointed the gun at the manager’s head and demanded more money.

The manager feared for her life and complied, police said.

Both men eventually left the store and ran east on Culver Boulevard. They remain outstanding.

The armed man is described as being between 20 and 30 years old, is about 5 feet 8 inches tall and weighs about 150 pounds. He was wearing a gray hoodie, a black face mask, black shorts, black shoes and has tattoos on his hand.

The second man is about the same age, is about 5 feet 10 inches tall and weighs about 200 pounds. He was wearing a black hoodie with “Adidas” on its right side, a skeleton face mask, blue surgical gloves, black pants and black shoes.

‘I don’t see how people can pay that’: After dropping for months, gas prices creep back up