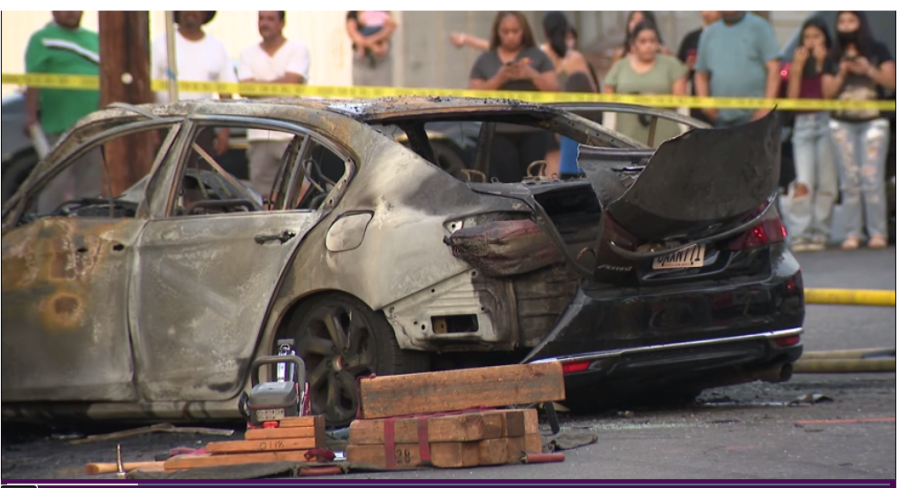 One person died and four others were transported to a hospital after a two-vehicle traffic collision resulted in a fire in the City of Industry Sunday evening, the L.A. County Fire Department announced. Flames completely engulfed both of the vehicles.

The collision happened on Mangate Ave. and Temple Ave.

Firefighters responded to a call around 5:46 p.m. as the fire broke out near someone’s home. Police officers blocked off the area around the crash as onlookers stood by.

One resident, Michael George, was shopping with his wife when he heard tires screeching and the cars slamming into a nearby wall. He didn’t see what led to the collision.

George helped the driver and a passenger from one of the cars get out of the vehicle as the car went up in flames.

“I was just trying to help out whoever was in the vehicles,” George said.

As a La Puente resident, George has frequently seen cars speed down the road where the crash occurred. He urges drivers to be more cautious when coming down the street.

“Just slow down,” George said. “You got people’s kids playing out here all the time.”

He also wants to city to do repairs around the area, saying that some of the street lights don’t work and that the walls need to be fixed.

No further details about what led to the crash or the victims’ conditions are available now.

Are restaurant meals really cheaper than cooking at home?